Samples of prasad sent for forensic examination were found to be laced with monocrotophos and organophosphate. 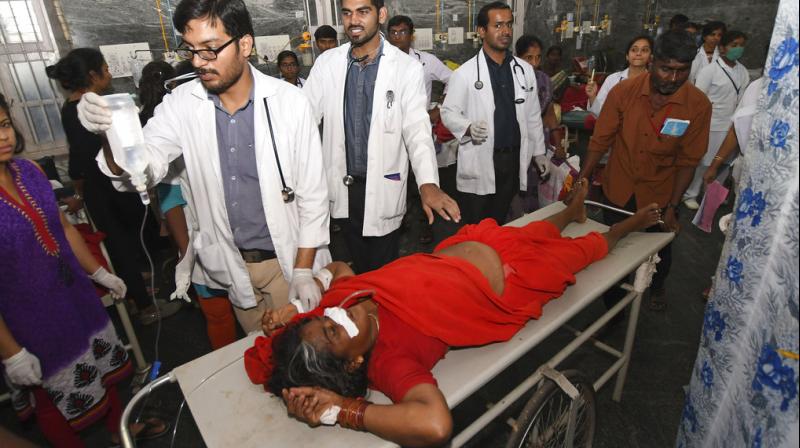 The death toll in the incident reached 14 on Monday. (Photo: AP)

Belagavi/Bengaluru: The Karnataka government on Monday said that the prasad in the food poisoning incident at a temple in Chamarajnagar district contained substances dangerous for human consumption.

The death toll in the incident reached 14 on Monday.

Samples of the prasad sent for forensic examination were found to be laced with monocrotophos and organophosphate that are dangerous to human beings, Karnataka deputy chief minister G Parameshwara said.

Parameshwara, who holds the Home portfolio, told the Karnataka Assembly session in Belagavi that seven people were taken into custody in connection with the incident. He added that some of the suspects have left the village and a search was on to catch them.

"Who did it and the motive behind will come out. An investigation is on... I believe in one or two days, the truth will come out," he said.

Noting that the prasad served at temples are considered sacred in the Hindu belief, Parameshwara called the fatal incident "painful."

Around 150 people were reportedly served vegetable rice as prasad and within half-an-hour of consuming it, people started falling ill.

"Immediately the ill were rushed to hospitals. 11 people died while 125 of them are undergoing treatment. Two died later in hospital and another died last night. Now the death toll stands at 14," he added.

According to health officials, Malli Bai, 35, who was in a critical state, died in a hospital on Sunday night.

He asked the government to take strict action and be "merciless" against those involved so that such incidents are not repeated.

Hanur MLA Narendra said two children were among those who died even as 15 affected children are hospitalised.

The health department said that 45 of those admitted to hospitals in the incident were in intensive care units including 24 who are on ventilators.

A case of culpable homicide not amounting to murder has been registered against seven people from the temple management under Section 304 of the Indian Penal Code, police said.

Police said they are probing suspected foul play in the incident.