Nirbhaya case: 'God must have held his head in shame...' SG says in SC

The apex court 'confirmed' capital punishment awarded to 1 of the 4convicts, Akshay Kumar Singh, in the case by dismissing his plea. 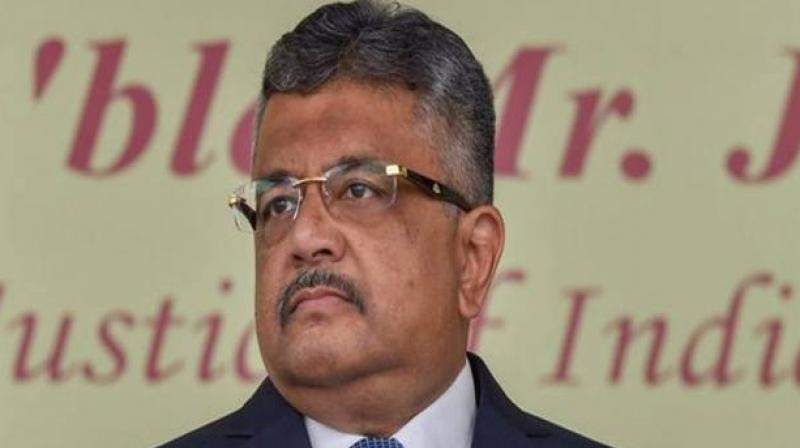 "There are some crimes for which the humanity cries. On that fateful day, God also must have held his head in shame for two reasons. First for not being able to save the innocent girl and second for having created these five monsters," Mehta told the bench, also comprising Justices Ashok Bhushan and A S Bopanna. (Photo: File | PTI)

New Delhi: God must have held his head in shame on December 12, 2012 for not being able to save the 'innocent' victim and for creating these 'five monsters', top law officer said in the Supreme Court on Wednesday while seeking dismissal of the review plea filed by one of the four convicts in the Nirbhaya gang rape and murder case.

Solicitor General Tushar Mehta, appearing for Delhi government, told a bench headed by Justice R Banumathi that there are some crimes for which the 'humanity cries' and Nirbhaya case was one of them.

"There are some crimes for which the humanity cries. On that fateful day, God also must have held his head in shame for two reasons. First for not being able to save the innocent girl and second for having created these five monsters," Mehta told the bench, also comprising Justices Ashok Bhushan and A S Bopanna.

The apex court 'confirmed' the capital punishment awarded to one of the four convicts, Akshay Kumar Singh, in the case by dismissing his plea seeking review of its 2017 judgement upholding his death penalty.

With this verdict on the plea of convict Akshay Kumar Singh, the review petitions of all the four death row convicts in the case stand dismissed by the top court.

On July 9 last year, the top court had dismissed the review pleas filed by the other three convicts -- Mukesh (30), Pawan Gupta (23) and Vinay Sharma (24) -- in the case, saying no grounds have been made out by them for review of the 2017 verdict.

During the arguments, Mehta said that the four convicts in the Nirbhaya case were making concerted efforts to 'delay the inevitable' and the law must take its own course as soon as possible.

"Please reject review as early as possible so that law can take its own course immediately," he said.

He said the convicts were trying to delay the inevitable as one of them had filed a mercy petition before the President but later withdrew it.

Mehta started his submissions, saying, "I do not think that this matter deserve more than 10 minute of your lordships judicial time to be wasted".

He said that in this case, there were three judicial adjudications -- first by the trial court, then the Delhi High Court and then by the Supreme Court -- and all of them have awarded death sentence to these convicts.

"There were specific evidence against this accused (Akshay) and all these things (issues raised by convict in his review plea) has already been considered by the trial court, high court and the Supreme Court," he said.

Mehta argued that DNA and forensic evidence, recoveries made from Akshay during the investigation, test identification parade of accused persons and odontology report clearly established the guilt of the convict in the gruesome crime.

"The trial court had convicted them. Then the high court threadbare examined everything. Thereafter the Supreme Court heard the matter and decided it. Then review petitions filed by three convicts were also rejected by this court," he said.

Mehta argued that Akshay's review plea was a 'cut and paste job' as the grounds raised by him in the petition were identical to those raised by the other three convicts earlier.

"These contentions (raised by Akshay's counsel) have withstood the scrutiny of four judicial orders," he said, adding, "The Supreme Court had said in its earlier verdict that it is a fit case to award death sentence and is rarest of rare".

The 23-year-old paramedic student was gang raped and brutally assaulted on the intervening night of December 16-17, 2012 inside a moving bus in south Delhi by six persons before being thrown out on the road.

She died on December 29, 2012 at Mount Elizabeth Hospital in Singapore. One of the six accused in the case, Ram Singh, allegedly committed suicide in the Tihar Jail here.

A juvenile was convicted by a juvenile justice board and released from a reformation home after serving a 3-year term.