Singh, along with External Affairs Minister S Jaishankar, is in the US for the second 2+2 dialogue. 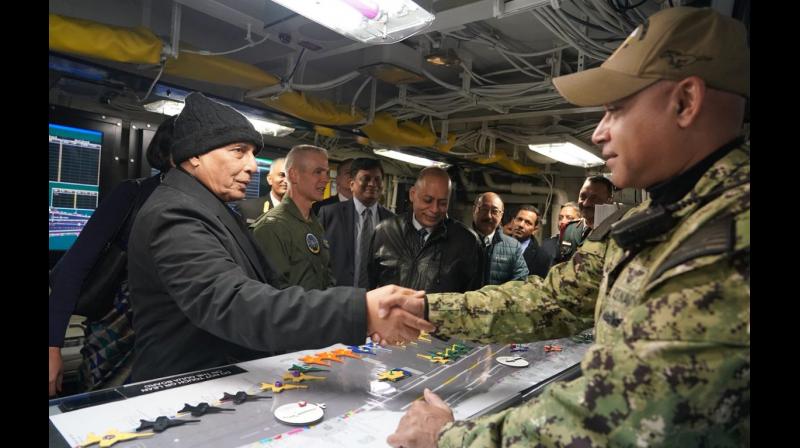 “Visited the Naval Air Station Oceana, Norfolk in the USA and observed a static display, and also F/A-18E flight demonstration,” Singh said in a tweet on Tuesday. (Photo: Twitter | @rajnathsingh)

Washington: Defence Minister Rajnath Singh visited Naval Air Station base at Norfolk in the US during which he observed a static display and a Boeing fighter jet demonstration and hoped that the 'strong defence ties' between the two countries will further strengthen in the near future.

Singh, along with External Affairs Minister S Jaishankar, is in the US for the second 2+2 dialogue on Wednesday.

They are being hosted by their US counterparts Defense Secretary Mark Esper and the Secretary of State Mike Pompeo.

“Visited the Naval Air Station Oceana, Norfolk in the USA and observed a static display, and also F/A-18E flight demonstration,” Singh said in a tweet on Tuesday.

“At the Naval Station Norfolk, I had the opportunity to be on board USS Dwight D. Eisenhower, the Nimitz-class aircraft carrier and we reflected on the strong defence ties between India and the United States,” he said in another tweet.

According to an official statement, the visit highlighted the depth of the US-India defence partnership and the close ties between the navies of the two countries.

The defence minister was accompanied by the Indian Ambassador to the US Harsh Vardhan Shringla, Defence Secretary Ajay Kumar, other senior officials of the Indian government and active-duty military officers.

Singh said his visit reflected on the strong defence ties between India and the US and hoped that the relations will further strengthen in the near future.

The US officials said the visit will further bolster the partnerships between the two countries.

India and the US continue to build defence cooperation ties through military exercises, defence trade and official visits and exchanges, including this visit to the largest US naval base in the world, the statement said.

Singh's visit to the naval air station gains significance given that India is seriously looking into these options of fighter jets both for its air force and navy.

Boeing, the manufacture of F/A-18E, has offered Block III of these fighter jets which, according to its officials, has carrier compatibility, advanced capability, affordability meaning low acquisition cost plus low cost per flight hour.

“International interest in the Super Hornet remains high and includes Finland, Switzerland, India and Germany, who recently down selected the Super Hornet over the competition. There are over 400 F/A-18 sales opportunities outside the US,” said Thom Breckenridge, vice president, Strike, Surveillance & Mobility, Global Sales and Marketing, Boeing Defense, Space & Security, in a recent interview.

“The F/A-18's integration with Indian carriers would demonstrate India's commitment as a ‘Major Defense Partner' and the Asia Pacific Reassurance Initiative, serving as an important symbol of the new relationship between the United States and India,” Breckenridge told PTI.

In fact, the F/A-18 is the anchor of US-India naval aviation cooperation that can result in sharing of tactics, upgrades and knowledge and sharing of best practices in modern naval aviation systems, carrier integration know-how, services and training and weapon systems.

“New to our India offer is “By India - For India” sustainment, training services and upgrades offering. Will leverage our current supplier base in India for F/A-18 Super Hornets to deliver high rates of mission readiness to our customers at competitive pricing, throughout the lifecycle of the aircraft,” he said.

Boeing in India has been providing sustainment and training services to Indian Air Force and Navy with mission readiness rates of over 85 per cent for the C-17 and P-8I India fleets, he added.

Breckenridge asserted that Boeing is uniquely qualified to offer mission capability rates using a scalable yet flexible solution to the Indian Navy building on successful sustainment programs that are currently being executed for the Indian Navy and Air Force.

“Boeing will partner with the Indian Navy, Indian private and public sector organisations, and US-based industry partners to localize specific capabilities that will allow F/A-18 Super Hornet to be sustained from India throughout the lifecycle,” he said in response to a question.