India is one of only 3 countries to enjoy annual '2+2' talks with US - a format meant to encourage deep, strategic ties. 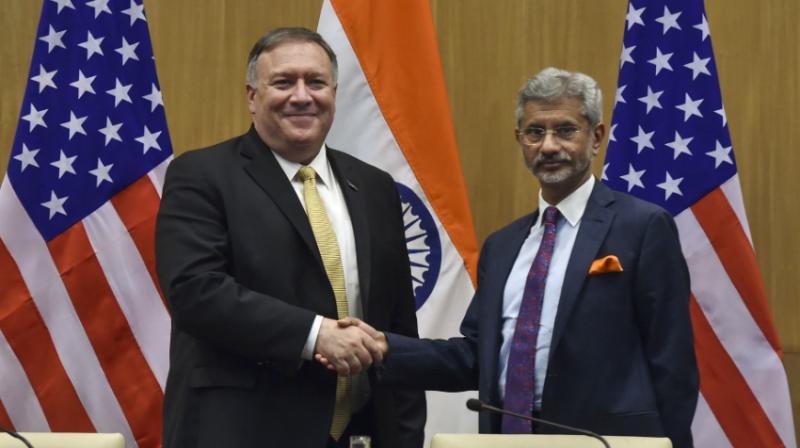 Defence Minister Rajnath Singh and Foreign Minister S Jaishankar will meet with US Secretary of State Mike Pompeo and Defence Secretary Mark Esper in Washington on Wednesday as India and the US work to ramp up defence and political ties. (Photo: PTI)

New Delhi/Washington: Defence Minister Rajnath Singh and Foreign Minister S Jaishankar will meet with US Secretary of State Mike Pompeo and Defence Secretary Mark Esper in Washington on Wednesday as India and the US work to ramp up defence and political ties.

India is one of only three countries to enjoy the annual "2+2" talks with the US - a format meant to encourage deep, strategic relations.

The talks come as Prime Minister Narendra Modi, bolstered by a massive win in the national election held earlier this year that cemented his second term, increasingly looks to solidify ties between the world's two largest democracies.

"We are working together more closely than many thought possible only a few years ago," said Alice Wells, the top US diplomat for South Asia, news agency AFP reported.

The US will seek ways with Jaishankar and Singh to boost cooperation on peacekeeping, judicial training, space and science, Wells said.

The 2+2 talks - the second such meeting after last year's inaugural edition in Delhi - is also expected to showcase India's growing defence purchases from the US.

The two sides could formally sign a deal for India to spend more than USD 2 billion for 24 Romeo helicopters, which are designed to knock out submarines and ships. The talks reflect "what has been a very strong bipartisan consensus of successive administrations on the importance of this strategic partnership," Wells said.

India has nevertheless come under the microscope in Washington in recent months. Major protests in the country over the amended Citizenship Act that fast-tracks citizenship only to non-Muslims from neighbouring countries have been going on.

PM Modi said the measure is meant to protect persecuted minorities, but critics see it as part of a plan to move away from India's secular foundations.

India will likely watch closely whether and how vocally the US raises the issue at a joint news conference. The State Department has asked India to "protect the rights of its religious minorities in keeping with India's constitution and democratic values."

But observers in both countries say that the US administration is in an awkward position to raise concerns, considering President Donald Trump himself has called for the exclusion of Muslims and cast Mexican immigrants as criminals.

Criticism has been harsher from other parts of the US government, especially the US Commission on International Religious Freedom, which has called for the consideration of sanctions on Home Minister Amit Shah over the new law.