Shekhawat said the details of seat-sharing will be announced at an ;appropriate time' 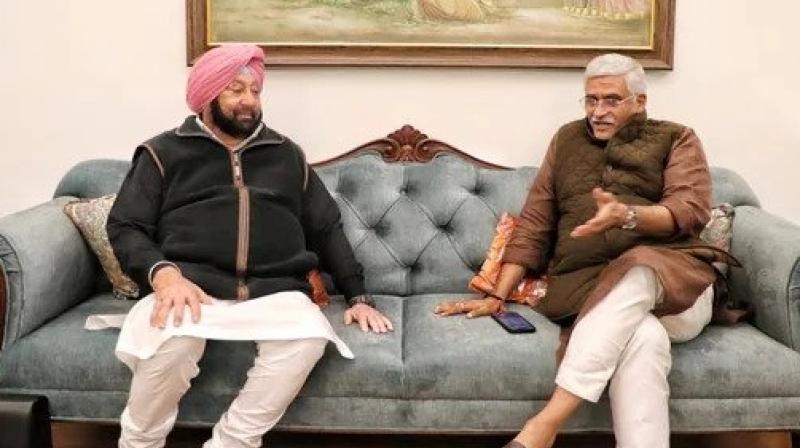 New Delhi: The BJP on Friday formally announced that it will contest the Punjab Assembly polls with Amarinder Singh’s Punjab Lok Congress, and the alliance is likely to be joined by other parties such as the SAD (Democratic) led by former union minister Sukhdev Singh Dhindsa.

Singh on Friday called on the BJP’s Punjab in-charge and Union minister Gajendra Shekhawat at his residence here. This was the second meeting between the two leaders after they met in Chandigarh earlier this month.

After the Friday meeting, they officially announced the alliance between their parties.

“Today, I want to make it clear that the BJP and Amarinder Singh will contest Assembly elections in Punjab together and we are working together,” Shekhawat told the media, with Singh by his side.

Shekhawat said the details of seat-sharing will be announced at an “appropriate time”. Singh said, “The alliance will definitely, 101 per cent, win the elections. And winnability will be the main criterion in finalising seats.”

Sources said Dhindsa’s SAD (Democratic) will also be part of the alliance. Some other smaller parties are also likely to join in, they said.

The BJP, which had been contesting only 23 seats in the 117-member Punjab Assembly player as a junior partner of the SAD,  will this time likely to contest more than half of the seats and will anchor the  alliance as a senior partner, they said.

Sources in the BJP said they see the elections in Punjab becoming a five-cornered fight as various farmer outfits may enter the fray, besides the already-present Congress, SAD and AAP.

Singh formed his own party Punjab Lok Congress days after he  resigned as the chief minister and quit the Congress.

Earlier, one of the BJP’s oldest allies SAD, a party based on principles Sikhism, moved out of the ruling NDA alliance over the issue of farm sector laws. The alliance with Amarinder Singh would give the BJP a prominent Sikh face in the Sikh-majority state.