Modi also stressed the importance of education and skill development, which is the key to gainful employment, and upliftment from poverty. 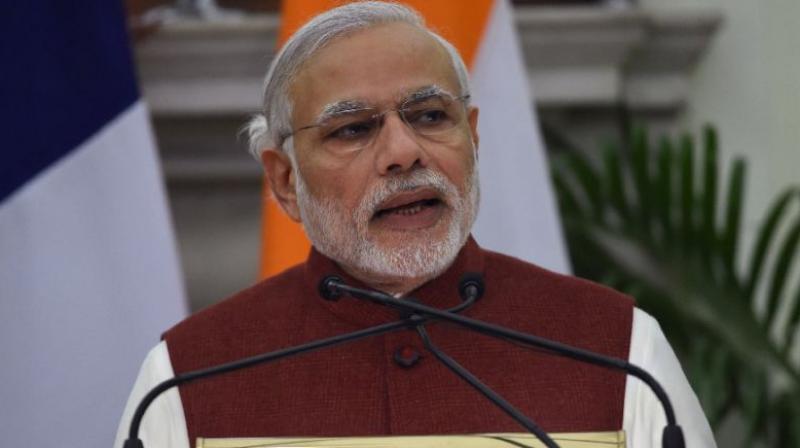 New Delhi: Meeting a delegation of Muslim Ulemas and intellectuals, Prime Minister Narendra Modi on Thursday hailed the Indian youth for resisting radicalisation and asserted that the country's culture, traditions and social fabric will never allow the nefarious designs of the terrorists or their sponsors to succeed.

Modi told the delegation that it was "our collective responsibility" to take this heritage forward, a PMO statement said in New Delhi.

"The delegation congratulated the Prime Minister on the steps taken by the Union government for inclusive growth, socio-economic and educational empowerment of all sections of the society including minorities," the statement said.

"The Prime Minister said that youth in India has successfully resisted radicalisation, which has affected several parts of the world today," it said.

The credit for this must go to the "long, shared heritage of our people" and that "it is now our collective responsibility to take this heritage forward", Modi told the delegation, which included Imam Umer Ahmed Ilyasi, Chief Imam of All India Organisation of Imams of Mosques, AMU Vice Chancelleor Lt Gen (Retd) Zameeruddin Shah and Jamia Millia Vice Chancellor Talat Ahmed.

He said "the culture, traditions and social fabric of India will never allow the nefarious designs of the terrorists, or their sponsors, to succeed", the statement said.

The Prime Minister also stressed on the importance of education and skill development, which is the key to gainful employment, and upliftment from poverty.

During the course of the interaction, the Prime Minister appreciated the government of Saudi Arabia for its decision to increase the number of Haj pilgrims for India, saying there is a positive image of Indian Muslims abroad.

The Muslim delegation was also appreciative of the Saudi government’s decision and thanked Modi for having successfully pursued the same, the PMO statement said.

"The delegation congratulated the Prime Minister for his efforts to strengthen relations with the countries across the world and said that today every Indian in every corner of the world is instilled with a sense of pride," the PMO said.

"The delegation, in one voice, supported wholeheartedly the campaign launched by the Prime Minister against corruption and black money," the statement said.

The delegation agreed that the fight against corruption will benefit the poor people including the Minorities the most, it added.

Members of the delegation also praised the Prime Minister for his efforts towards Swachh Bharat, the statement said.

Later, Modi tweeted, "Had in-depth discussions with a delegation of Ulemas, intellectuals & academicians from the Muslim community."

The Prime Minister said he also spoke about how "the great culture, traditions and social fabric of India will always stand as a bulwark against radicalisation among youth".

Naqvi said the Prime Minister had "good discussions" with the 38-member delegation for more than one-and-a-half hours during which a range of issues were discussed.

Talat Ahmed, when contacted, said the Prime Minister responded "positively" to the issues deliberated upon.

"He was very happy to meet the delegation. We thanked him for the work he is doing for the community, especially for ensuring the increase in Haj quota," said the Jamia Millia Islamia University Vice Chancellor.