Sadhvi, in her bail plea, claimed that she has been languishing in jail for over six years. 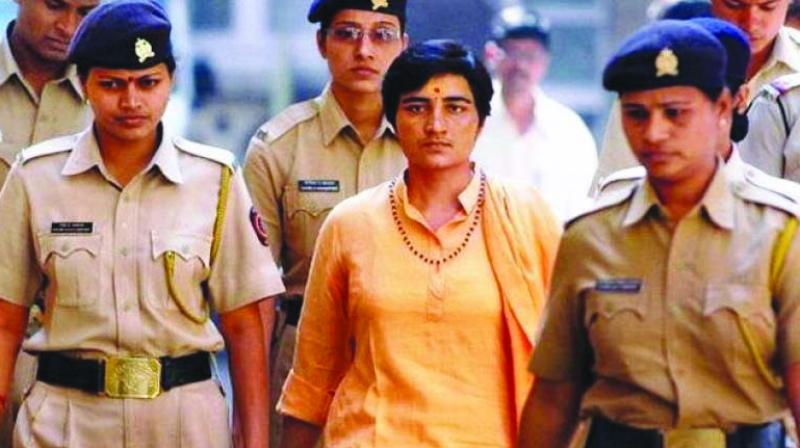 Mumbai: The National Investigation Agency (NIA), probing the 2008 Malegaon bomb blast case, on Thursday told the Bombay High Court that it has no objection if the HC grants bail to accused Sadhvi Pragya Singh Thakur.

Additional Solicitor General Anil Singh, appearing for NIA, said the agency has already held that the provisions of stringent Maharashtra Control of Organised Crime Act (MCOCA) are not applicable in the case.

A division bench of Justices R V More and Shalini Phansalkar-Joshi was hearing an appeal filed by Sadhvi challenging a sessions court order rejecting her bail.

"The earlier probe agency, Maharashtra Anti Terrorism Squad (ATS), had applied MCOCA on the ground that the accused persons were involved in other blasts also and hence were part of an organised crime syndicate. However, the NIA probe has revealed that the accused persons were only involved in Malegaon blast and hence MCOCA is not applicable," Singh said.

"Even before NIA took over the probe, several prime witnesses have retracted their statements and complained that they were forced by ATS to say false things in their statements. Considering all this, we (NIA) have no objection to the court granting bail to applicant (Sadhvi)," he said.

Sadhvi, in her bail plea, claimed that she has been languishing in jail for over six years and with two probe agencies submitting contradictory findings to the court, it would not be correct to keep her in jail.

"The trial will take a long time to commence and conclude. The charges are yet to be framed in the case. The applicant is a woman who is suffering from a terminal disease.

Hence, it would proper for the court to grant her bail with whatever conditions it wishes to impose on her," said the plea.

It further alleged that the ATS probe was a tainted one with several witnesses retracting their statements. The HC will hear the plea again on January 31.

A bomb strapped to a motorcycle had exploded in Malegaon on September 29, 2008, killing seven people and injuring around 100.

According to the investigating agencies, the blast was carried out by right-wing extremists and a total of 11 persons are at present in jail in the case, including Lt Col Prasad Purohit and Sadhvi.

Talks with the RLD, sources said, failed as it wanted more seats but the SP was not ready to oblige.

"We wanted the seats of our choice but there was no agreement on it," RLD spokesman Anil Dubey later said.

He, however, declined to elaborate further.

Efforts to cobble together a grand alliance in Bihar too had come across a hurdle with the SP declaring to contest the 2015 Assembly polls in that state on its own.

The Bihar unit of the SP had demanded at least 27 seats, but later agreed to contest from 12 seats.

When finally they were given only five seats, the party took it as a humiliation and decided to go it alone.