Earlier, Modi told O Panneerselvam that he fully understood the sentiments of Tamil Nadu people on the Jallikattu issue. 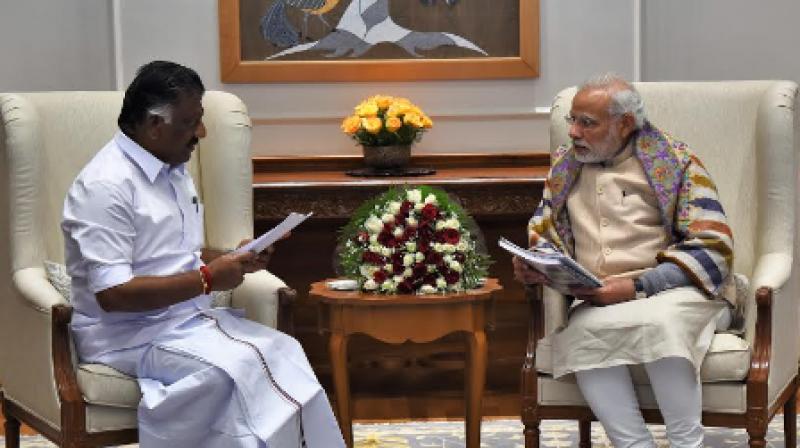 "We will take steps with the backing of the Centre. You will soon see (the steps). Wait, good will happen," he told reporters after the meeting in which he urged the Central government to issue an ordinance to enable the sport to be conducted.

Modi told the Chief Minister that he fully understood the sentiments of Tamil Nadu people on the Jallikattu issue.

"I am aware of the feelings of the people," Modi was quoted by the Chief Minister as having told him. After the Chief Minister pressed for immediate steps for promulgation of an ordinance, the Prime Minister told him that the matter was in the Supreme Court but the Centre would support any steps taken by the state government on this.

Panneerselvam also recalled that AIADMK chief Sasikala has written a letter to the Prime Minister seeking Centre's ordinance to hold the sport.

The Chief Minister said he told the Prime Minister that Jallikattu is an age-old heritage of Tamil Nadu and a sport symbolising bravery and that it should be allowed.

In Madurai, District Collector Veeraraghava Rao said the protests against the ban on Jallikattu in the last few days had been peaceful.

He told the protesters that the government was taking "all efforts to organise Jallikattu."

"Jallikattu is part of Tamil culture and was necessary to protect the culture. Just as we rear cows in our house and do pooja, we also rear bull and hold bull games... it was in our culture. There is nothing wrong in fighting for protecting the culture. But it should be peaceful", he told them.

Those participating in the protest were being provided food and water. They are at the same venue since the agitation started, he said.

In Tiruchirappalli, protests continued for the second day on Thursday and it did not affect the normal life of people.

The protesters wanted an order from the Supreme Court, which imposed a ban on Jallikattu, in favour of the sport striking a balance between the sentiments of Tamil Nadu people and the animal lovers.

The protesters also demanded a ban on PETA, which opposes the bull taming sport.

In Puducherry, students of various educational institutions continued their agitation in favour of the bull taming sport boycotting classes for the second day.

Thousands of students from various institutions and volunteers of various youth outfits were holding protests in the sprawling AFT mill ground on Puducherry-Cuddalore road raising slogans in support of Jallikattu and seeking ban on PETA.

Members of various non-political outfits also formed a human chain in the city to register their solidarity with the agitation.