The motion to be debated said, 'That this House notes breaches of international human rights on the Indian side of the LoC in Kashmir.' 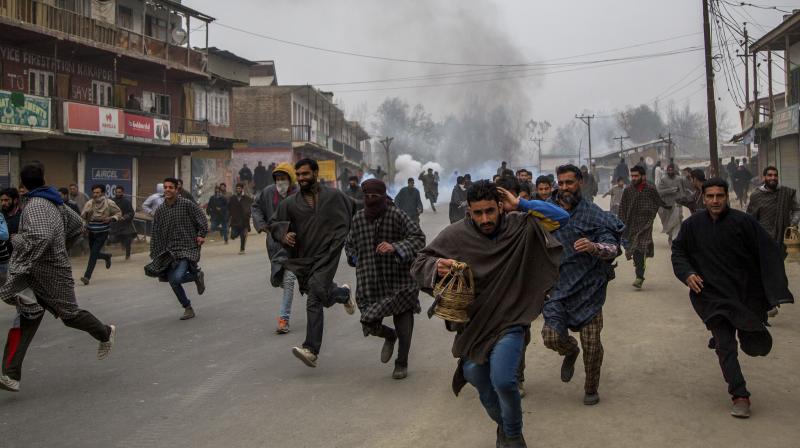 Kashmiri villagers run for cover from tear gas shells and pellets fired at them by Indian police during a protest near the funeral of Rayees Ahmad Dar, a suspected militant of Lashkar-e-Taiba (LeT) in Kakpora village south of Srinagar. (Photo: AP)

New Delhi: India on Thursday reacted strongly to reports that British Parliament may debate on the issue of Jammu and Kashmir, saying there is no room for a third party role in the matter.

Noting that the government was aware of the development, External Affairs Ministry Spokesperson Vikas Swarup said, "Our position on the issue of Jammu and Kashmir is very clear that all issues between India and Pakistan are to be resolved bilaterally and peacefully in accordance with Simla Agreement and Lahore Declaration. "There is no room for third party."

According to reports, UK's House of Commons was likely to debate on J&K issue which was proposed by the Backbench Business Committee following an application from British MP David Nuttall.

The motion to be debated said, "That this House notes the escalation in violence and breaches of international human rights on the Indian side of the LoC in Kashmir; calls on the Government to raise the matter at the UN Nations; and further calls on the Government to encourage Pakistan and India to commence peace negotiations to establish a long-term solution on the future governance of Kashmir based on the right of the Kashmiri people to determine their own future in accordance with the provisions of UN Security Council resolutions.”