2017 can well be described as a watershed year in India-China relations. 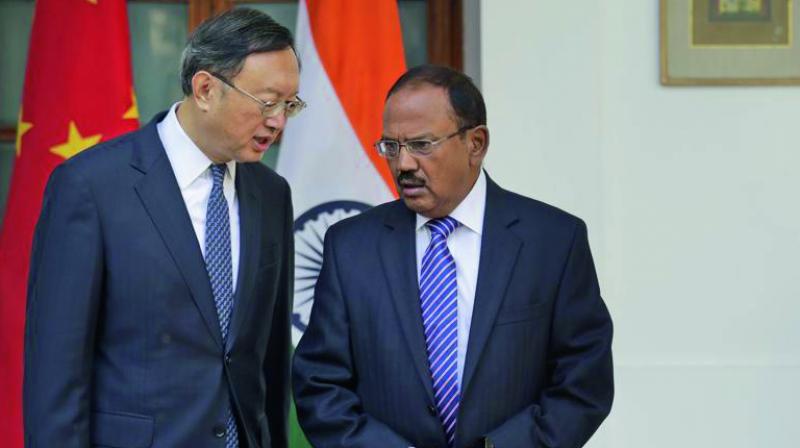 National security adviser Ajit Doval (right) talks with Chinese state councillor Yang Jiechi before their delegation-level meeting in New Delhi on December 22. Special representatives of India and China held the 20th round of negotiations on the border issues. The meeting came four months after the forces of the two sides confronted each other at the Doklam plateau. (Photo: AP)

Considering the climactic end of 2017 on India-Pakistan relations, let us begin our crystal-gazing on 2018 with Pakistan.

Pakistan’s atrocious conduct towards Commander Kulbhushan Jadhav’s mother and wife and the walloping of its forces on/across the Line of Control (LoC) and International Boundary (IB) and attrition of Pakistani and Pak army supported terrorists in the Valley, leave little doubt about how the relations in 2018 will be between New Delhi and Islamabad and between the forces on the ground.

While within Jammu and Kashmir particularly the Valley, some hopes can be pinned on interlocutor Dineshwar Sharma’s plans/initiatives, on the diplomatic front and activities/operations of Pakistan Army /rangers/Inter Services Intelligence (ISI) there will be no let up. Despite well over 200 Pak-supported terrorists being killed in J&K during 2017-more than in any previous year, recruitment of terrorists has not/is not expected to be reduced. With elections due in Pakistan in July 2018, Pak army’s hold on the government is bound to tighten even further. Whatever be the course/measures taken by Mr Sharma, New Delhi should be very clear that the pressure by National Intelligence Agency on the separatists and their money laundering is relentlessly maintained.

Social media which was extensively used for glorifying Kashmiri youth taking to terrorism and radicalising Kashmir Valley public is now being shunned by Hizbul Mujahideen (HM) as many of its poster-boys got identified and killed by security forces. Ingenuous use of social media by Army and security forces by involving mothers/ wives/close relatives of youth motivated to join terrorist groups to return home and join the mainstream resulted in some of them doing so. This must be stepped up in 2018, as ISI is desperately trying to recruit Kashmiri teenagers into not only HM, but Pakistani terrorist groups also.

2017 can well be described as a watershed year in India-China relations. While the Doklam stand-off of 74 days (16 June-28 August 2017) was the longest incursion, it also marked the completion of 50 years of managing the 4,056-km-long disputed Line of Actual Control traversing along five Indian states (Jammu and Kashmir, Uttarakhand, Himachal Pradesh, Sikkim and Arunachal Pradesh) by dialogue. Ever since the fierce skirmishes of September-October 1967 at Nathu La and Cho La in Sikkim, soldiers of both countries dealt with thousands of incursions or transgressions over 50 years including Doklam, by literally wrestling, grappling, or stopping by hand-held human chain as Indian soldiers often did, but importantly, in every case, resolving the dispute by discussion and without any trigger-pulling.

The Doklam stand-off stood out for much psychological warfare and bluster by the Chinese government and state-controlled media versus, for a change, mature diplomacy by India as its troops stood firm on the ground. It ended with a pleasant surprise of both armies reverting back to their pre-June 16, 2017 status quo.

On September 22, 2017, an article written by ambassador of the People’s Republic of China to India Luo Zhaohui published in an Indian daily newspaper titled Turn the page to a new chapter, came as another pleasant surprise. Excerpt: “In September, Xiamen city of China not only hosted the BRICS Summit, but also witnessed an especially important meeting between Chinese President Xi Jinping and Indian Prime Minister Narendra Modi. This was the first after the Dong Lang (Doklam) stand-off. As Chinese Ambassador to India, I had the privilege of participating in the meeting. I felt that it sent a critical message of reconciliation and cooperation to the world in a timely manner… The outcomes were beyond expectations. Both leaders agreed to start a new chapter. An important consensus has been reached to enhance mutual trust, focus on cooperation, and manage differences. Both leaders also agreed to conduct closer high-level exchanges, revitalise a series of dialogues and mechanisms, as well as promote youth and educational cooperation. President Xi emphasised that we should be each other’s development opportunities rather than be threats to each other — “dragon and elephant should dance together”. PM Modi shared the same idea and believes that the political effects of “making one plus one eleven” can be achieved in China-India relations. The meeting was originally scheduled for half an hour but lasted for an hour and 25 minutes. This shows that both sides are willing to devote enough time to conducting a comprehensive and in-depth exchange of views... Both sides should set long-term goals for the development of our bilateral relations.”

Such homilies/sentiments repeated by Chinese leaders then, must not make India feel complacent. While India’s forces on the LAC will need to maintain their sharp guard, its maritime forces will need to be very alert in the Indian Ocean Region.

As part of its rapid modernisation, in 2017 China has hiked defence spending to $152 billion, about three times that of India, but its actual expenditure is estimated to be much higher. Xu Guangyu, a senior advisor to the China Arms Control and Disarmament Association, reportedly stated that China needs to develop its own aircraft carrier battle teams, with at least six aircraft carriers, maritime forces led by guided missile destroyers, as well as attack submarines and added that it will build about 10 more bases for the six aircraft carriers in/around countries friendly to China, such as Pakistan.

With Chabahar port becoming operational the increasing presence of Indian Naval vessels in its vicinity is bound to irk the Chinese navy around Pakistan’s Gwadar port just 70 km away and may even lead to confrontations.

With India being a much sought after country for joint military exercises, there may be an increase in such engagements and Indian Navy and Coast Guard ships may also increase their port of call visits.

On defence production, under the ‘Make in India’ initiative of the government, several measures have been taken to promote indigenous design, development and manufacture of defence equipment in the country by harnessing the capabilities of the public and private sector. These measures include according preference to procurement from Indian vendors under the Defence Procurement Procedure (DPP), liberalisation of the licensing regime and FDI policy by raising the cap on FDI in the defence sector, simplification of export procedure, streamlining of defence offset guidelines etc.

Recently, the government has notified the ‘Strategic Partnership (SP)’ Model which envisages establishment of long-term strategic partnerships with Indian entities through a transparent and competitive process, wherein they would tie up with global Original Equipment Manufacturers (OEMs) to seek technology transfers to set up domestic manufacturing infrastructure and supply chains.

In the last three financial years i.e., 2014-15 to 2016-17, the Government has accorded Acceptance of Necessity (AoN) for 105 proposals worth `2,33,000 Crore approximately, in ‘Buy (Indian-Indigenously Designed & Developed Manufactured (IDDM)’, ‘Buy (Indian)’, ‘Buy and Make (Indian)’ and ‘Make’ categories of capital acquisition i.e. Request for Proposal (RFP) will be issued to Indian vendors only.

The Army is at least a decade overdue in getting a new series of assault rifles, light machine guns (LMGs) and carbines. Reportedly the government is preparing to release a tender for 77, 00, 000 assault rifles and redoubling its efforts to buy more than 54,000 LMGs and 44,618 carbines. Casualties in counter-terror operations can be greatly reduced if the Army is provided better assault rifles. Artillery and air defence artillery weapon systems are also overdue.

For Indian Navy, the Naval Chief Admiral Sunil Lanba recently reportedly disclosed that 41 ships of different categories, including an aircraft carrier, and submarines, including the nuclear ones and Scorpenes, are expected to be inducted in the next couple of years.

He added that the vessels were being built at different shipyards, which include government-owned and private enterprises in various places in India.

The Indian Air Force’s helicopter fleet is expected to be re-equipped with American Chinooks and Cobras in the coming year, while the supply of light combat aircraft Tejas, being produced at Hindustan Aeronautics Limited, is already on. The French Rafales will probably come by 2019.

In 2018, all these mentioned moves as well as strategic infrastructural development in India’s North East and replacements/ acquisitions of weapons and equipment will need to be relentlessly pursued to make good long pending deficiencies.