India   All India  19 Jan 2018  Rebels give proposal to CJI, no settlement
India, All India

Rebels give proposal to CJI, no settlement

The CJI has agreed to consider the four rebel judges’ proposal and meet them again next week. 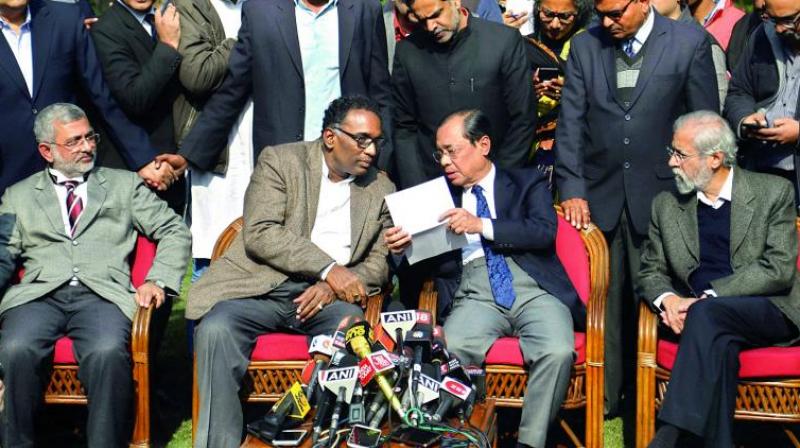 This was the third meeting between the top judges to cement the rift that became public when the four judges addressed a press conference on January 12. (Photo: AP)

New Delhi: Chief Justice of India Dipak Misra once again met four senior-most Supreme Court judges on Thursday and was given a “proposal on roster” by the aggrieved judges to resolve their concerns over the lack of impartiality in allocation of high-profile cases and constitution of benches. However, no settlement has been arrived at yet.

Without disclosing the contents of the proposal submitted to the CJI, a source said that the suggestions contain several issues that need to be resolved in the interest of the institution.

The 30-minute meeting between the CJI and the four judges — Justices J. Chelameswar, Ranjan Gogoi, Madan B. Lokur and Kurian Joseph — took place over tea before the start of court proceedings at 10.30 am.

This was the third meeting between the top judges to cement the rift that became public when the four judges addressed a press conference on January 12.

Sources told this newspaper that on Thursday, besides the CJI and the four senior judges, Justices A.K. Sikri, N.V. Ramana, Uday Lalit and D.Y. Chandrachud also participated in the “conciliatory talks”.

The CJI has agreed to consider the four rebel judges’ proposal and meet them again next week.

During the court proceedings, the counsel for a petitioner sought to restrain the media from publishing, discussing or politicising the tussle between the judges, but CJI Misra refused to entertain any such plea.

The four judges have been aggrieved over the roster system being followed by CJI Misra. They allege that he has been selectively allocating important cases to some of the junior judges, including the assignment of two PILs seeking probe into the death of former CBI judge H.B. Loya under mysterious circumstances. Loya, who was handling the Sohrabuddin fake encounter case involving BJP president Amit Shah, refused to discharge him from the case.  The judge who succeeded Loya subsequently discharged Mr Shah.

Apex court’s Justice Arun Mishra, who was heading the bench hearing the PILs, recused himself from matter on Tuesday. He had earlier accused the four seniors of tarnishing his image and questioning his integrity.

On January 12, the four judges said that they were being sidelined and alleged that the situation in the Supreme Court was not in order as many “less than desirable” things had taken place in the last few months.

The four judges are also upset over the unilateral decision of the CJI in November to keep to himself the power of hearing urgent “mentioning” of  matters by advocates for early listing, thus, clipping the wings of the next two senior-most judges.