A meeting at RJD leader Tejashwi’s home remained inconclusive after all alliance partners stuck to their demands on tickets. 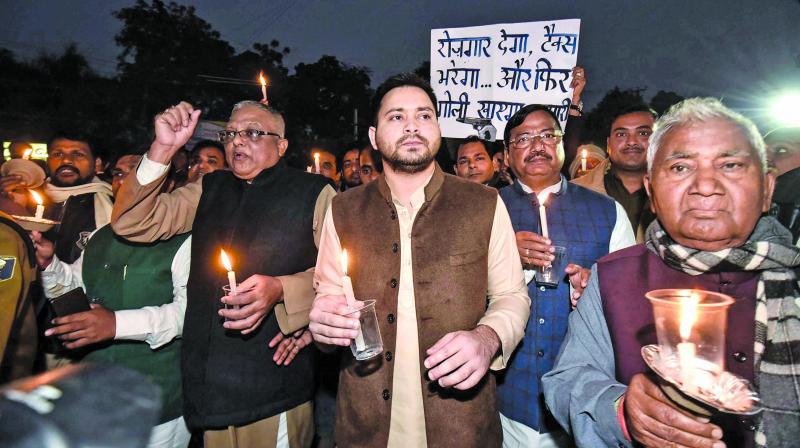 A file photo of Bihar grand alliance leaders being led by RJD leader Tejashwi Yadav in a candlelight march in Patna against the Janata Dal (United) government headed by chief minister Nitish Kumar.

Patna: After stitching a rainbow coalition in Bihar, the Rashtriya Janata Da-led grand alliance is facing trouble in dealing with its partners who have been demanding a sizeable seat share for 2019 general elections.

A meeting held at Tejashwi Yadav’s residence last week to discuss the thorny issue remained inconclusive, as most of the partners were adamant in their demand for “respectable seat adjustments”.

Sources tell us that the grand alliance, including the Congress and Upendra Kushwaha’s RLSP, had expected that RJD chief Lalu Yadav, who is in judicial custody after being convicted in fodder scam and being treated at Rajendra Institute of Medical Sciences (RIMS), Ranchi, would get bail and finalise seat-sharing with alliance partners. But the situation worsened after the Jharkhand high court rejected his bail petition last week.

Reports suggest that Tejashwi Yadav, who wanted to wrap up the seat-sharing deal after Makar Sankranti, may defer it for another week due to growing demands for more seats from alliance partners.

RJD insiders told this newspaper that Tejashwi Yadav along with other grand alliance leaders may meet Lalu Yadav later this month to finalise the issue.

Political analysts are of the view that SP-BSP getting into an alliance in neighbouring Uttar Pradesh has cast a shadow over the formation of a strong grand coalition against the BJP in a politically important state like Bihar which has 40 LS seats.

Unease was seen within the Congress camp here on January 14 after Tejashwi Yadav openly supported the UP model by meeting BSP supremo Mayawati and SP chief Akhilesh Yadav in Lucknow.

Tejashwi Yadav’s statement came after a Congress  leader said, “The RJD along with others will have to compromise on seat-sharing in order to pose a threat to the BJP during LS elections”.

While all grand alliance partners attended the Congress Makar Sankranti feast in Patna, Sharad Yadav and Jitan Ram Manjhi skipped the event triggering  speculation that both were unhappy with the attitude of the RJD and Congress on the issue of seat-sharing. Reports suggest that the RJD has been floating the idea to contest Lok Sabha elections in Bihar on 20-20 formula.

Sources said that as per the earlier plans, the RJD, being the largest party in Bihar Assembly with 80 seats, may keep a maximum seats for itself. Congress party may get 10 seats while coalition partners like the HAM, the LJD, and others including two Left parties (CPI and CPI-ML) may be asked to contest on the remaining seats.

However, HAM insiders told said that the party has  informed the grand alliance coordination committee about its presence in at least eight seats. There is a buzz that the Congress is seeking more that 10 seats. The Congress, however, played down reports of uneasiness in Mahagathbandhan over seat adjustments. Senior Congress leader Prem Chand Mishra said, “There is no trouble in Mahagathbandhan over seat-sharing. Agenda of this unity is to stop communal forces.”