India   All India  19 Feb 2017  Chaos in Tamil Nadu Assembly as Speaker roughed up
India, All India

Chaos in Tamil Nadu Assembly as Speaker roughed up

When the Speaker returned and said he would order voting, DMK legislators again rushed to his podium. 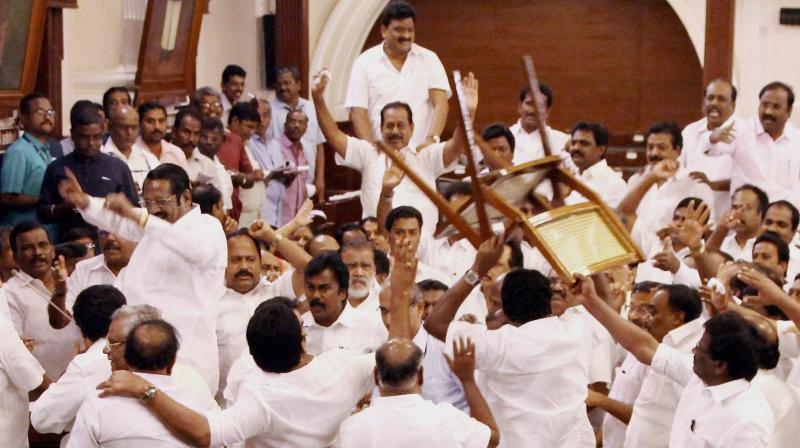 A view of Tamil Nadu Assembly during the Vote of confidence motion in Chennai. (Photo: PTI)

Chennai: The Tamil Nadu Assembly turned into a battlefield on Saturday with Speaker P. Dhanapal being shoved around by DMK legislators angered by his refusal to order a secret ballot to decide on the confidence vote. He alleged that his shirt was torn and the main Opposition had targeted him only because he was a dalit.

When the Speaker announced the voting, brushing aside demands for a secret ballot, DMK members rushed to his table shouting slogans. Some climbed to his chair  and roughed him up. He then adjourned the House by an hour and left.

When the Speaker returned and said he would order voting, DMK legislators again rushed to his podium. His mike was snatched, files thrown and he was pushed. Security personnel managed to escort the Speaker to his room, but not before he ordered the eviction of the DMK members. It was about 1.30 pm then.

Before the House could assemble at 3 pm, about 250 security personnel entered the Assembly to evict the DMK legislators, who stoutly resisted. “You can only carry our dead bodies from here”, screamed DMK deputy leader Durai Murugan, warning the security men.

The physical tussle between the DMK legislators and the security personnel lasted about 20 minutes at the end of which the latter managed to push the protesters out of the House. Stalin was carried out by half a dozen security men. Eyewitnesses said the DMK leader was punched on his back and his shirt was torn. Two other DMK legislators, S. Pugazhendi and J. L. Eswarappa too had their shirts torn in the melee.

After the eviction at around 2.45 pm, the Assembly staff cleaned up the mess and Speaker Dhanapal returned to his chair. He condemned the DMK attack and announced the voting. Eight Congress MLAs and the lone IUML legislator staged walk-out shouting that democracy was being trampled upon.

With the entire opposition absent, the Speaker announced voting and Edappadi won easily--122 vote for him and 11 against (OPS group).