Three soldiers were also injured in the gunfight, an official said. 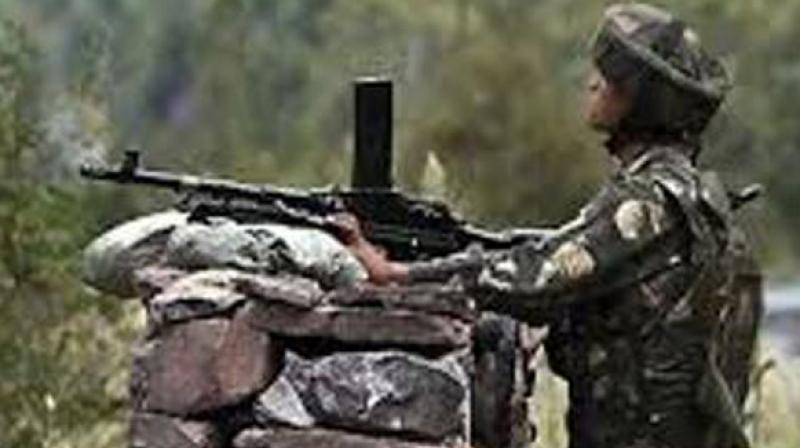 A huge quantity of arms and ammunition along with a Pakistani flag was recovered from the slain terrorist whose body was recovered during the search and sanitisation operation. (Photo: Representationall/ANI)

Jammu: An attack by Pakistan's notorious Border Action Team (BAT) was repulsed by the Army which killed a heavily-armed terrorist and grievously injured two others along the Line of Control (LoC) in Jammu and Kashmir's Poonch district, a senior official said on Monday.

Three soldiers were also injured in the gunfight, an official said.

The BAT team, comprising Pakistani regulars and terrorists, tried to sneak in from across the LoC in Gulpur area of Khari Karmara sector on Sunday evening under cover of heavy shelling but the alert troops foiled their nefarious designs, Jammu-based Army PRO Lt Col Devender Anand said.

A huge quantity of arms and ammunition along with a Pakistani flag was recovered from the slain terrorist whose body was recovered during the search and sanitisation operation, he said.

"We will be offering to hand over the body of the armed intruder to the Pakistan Army," the official added.

Three soldiers were injured in the gunbattle and were evacuated to military hospital for specialized treatment, said an official, who did not want to be named.

Sharing details of the incident, Lt Col Anand said that on Sunday evening at about 17:15 pm, the Pakistan Army initiated unprovoked and indiscriminate firing from small arms, automatics and mortars engaging the troops deployed at forward posts on the LoC.

“Our troops responded with retaliatory fire in equal measure. The alert troops noticed some movement and immediately engaged the group with effective fire and there was immediate retaliation from the armed intruders,” the Army PRO said.

In the firefight, an armed intruder was killed and at least two others sustained grievous injuries and were seen retreating towards a Pakistani post, the official said.

Three back packs, a medical satchel and a Pakistani national flag were also recovered from the scene of the gunfight, he added.

“The modus operandi adopted by the Pakistan Army and their sponsored and supported terrorists in this instance is similar to the attempts made in the recent past in incidents like the one at Keri and Gambir along the LoC and Sunjuwan in Jammu,” he said.

"The heavy recovery of weapons like disposable RLs, Rocket propelled grenades (RPG) and incendiary ammunition clearly indicates implicit support of the Pakistan Army to target and cause casualties while maintaining a degree of deniability," he said.

After the Sanjuwan incident, in which three terrorists and seven others including six soldiers were killed, on February 10, Pakistan has refused to accept the bodies of its citizens, he said.

However, we will be offering to hand over the body of the armed intruder killed yesterday to the Pak Army," he said.

Pakistan continues in its nefarious designs of supporting and abetting infiltration across the LoC contrary to their stated position about “water tight arrangements along LoC to check terrorist movement", the Army official said.

The statement by Pakistan's Chief of Army Staff on Sunday at the Munich Conference in Paris that there were no safe havens for terrorists in Pakistan has proven to be hollow, he said.

Pakistan was supporting terrorism in a systematic manner with the complete support of its army, he added.

Pakistan has repeatedly failed to respect and fulfil its Ceasefire Violation Agreement and the January 2004 commitment on not allowing its soil or territory to be used for terrorism against India, he said.

Lt Col Anand said it was clear that Pakistan was never interested in bringing peace and stability to J&K.

“They have been vitiating the atmosphere both along the LoC and in the hinterland,” he said.

The Jammu-based white knight corps is keeping a strict and constant vigil across the LoC and all the security forces are prepared to thwart any nefarious designs of Pakistan sponsored terrorists, he said.

Meanwhile, a junior commissioned officer (JCO) was injured in an accidental mine blast in a forward area in Mankote sub-sector on Sunday. The officer accidentally stepped over a landmine, which was washed away, causing an explosion, resulting in injuries to him, an official said on the condition of anonymity.