According to the Global Nutrition Report 2017 (GNR), India is at the top of the list of women suffering from anemia. 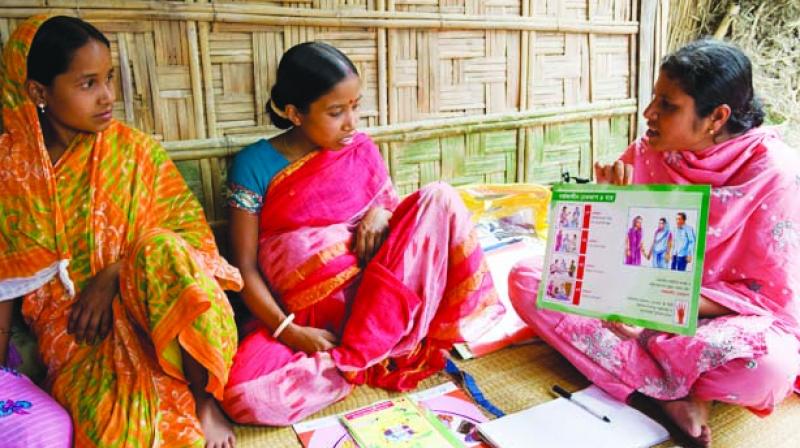 The United Nations summit for the adoption of the post-2015 development agenda was held from September 25-27, 2015, in New York and convened as a high-level plenary meeting of the General Assembly. The 17 Sustainable Development Goals (SDG) and 169 targets, which were announced, demonstrate the scale and ambition of this new universal agenda. They seek to build on the Millennium Development Goals and complete what these did not achieve. The goals and targets will stimulate action till 2030 in areas of critical importance for humanity and which emphasises 5 Ps — People, Planet, Peace, Prosperity and Partnership — also known as the global goal.

Out of the 17 goals, SDG three aims to promote healthcare and healthy life among people of all ages and target 3.1 says — By 2030, reduce the global maternal mortality ratio to less than 70 per 100,000 live births.

Prenatal pregnancy test (at least four times) of pregnant women in North Africa, which in 1990 was 50 per cent, became 89 per cent by 2014. The use of contraceptives has increased worldwide and 64 per cent women were using contraceptive methods in 2014.

Maternal health in India
According to a joint report of the United Nations Agency and World Bank in 2015, the number of deaths of pregnant women in India due to lack of health facilities was 1,36,000. According to the report, 20 per cent of the deaths of women in the country were due to lack of blood and 10 per cent of deaths were due to complications related to abortion. According to the data released by the World Health Organisation, five women die every hour in India, the biggest reason behind this is bleeding and there is no control over it.

According to the Global Nutrition Report 2017 (GNR), India is at the top of the list of women suffering from anemia. More than half of women attaining reproductive age (51 per cent) have anemia. When such women get pregnant, the lives of both mother and child are seen to be endangered.

In the same study, researchers from Princeton University’s Woodrow Wilson School for Public & International Affairs found that 40 per cent of pregnant women in India are lower in weight than normal (seven kg per annum), which is dangerous for the child in womb as well as for the health of the mother.

Similarly, according to Unicef’s report, Ending Child Marriage: Progress and Prospect 2014, every third child bride in the world is in India. Due to child marriage, the girls become pregnant at a young age resulting in the following — death, increase in miscarriage, birth of malnourished children, malnutrition in the mother, lack of blood, increase in infant mortality rates, reproductive path infection, increase in sexually transmitted diseases.

Lack of health facilities
In India health facilities are not as good in villages as compared to cities. Looking at 2011’s rural health statistics, villages lacked 88 per cent specialist doctors and 53 per cent nurses. In cities, there are six doctors for a population of 10,000, and in villages it is three doctors per 10,000 people. As per institutional delivery status, according to NFHS-4, 78.9 per cent pregnant women have institutional delivery.

Attempts by the Centre and states
A number of efforts are being made by the government regarding the maternal health at the grassroots level. Under the National Health Mission (NHM), emphasis is on improving health facilities in the backward states and rural areas for children and women. Prime Minister’s Matritva Vandana Yojana, Janani Suraksha Yojana, Janani Shishu Suraksha Karyakaram, etc, are being implemented. On February 15, 2017, the Government of India took a decision to reduce the mortality rates of pregnant women and newborns over the next five years.

Cause of failure
In spite of government efforts, the condition of maternal health services is worrisome due to lack of doctors-staff in the government hospitals, the absence of facilities, the lack of resources, poor behaviour of the staff and lack of awareness among the people.

But the major cause of failure is our conservative mindset towards society and especially towards women. It is necessary that women should not be looked at only as child-bearing machines. If a family is conscious of the health of women throughout life, then both the mother and the child will surely be healthy. But in this era of science and education there is no significant change in the attitude of people towards pregnant women, as a result of which the mother in most cases has to give up her life or the life of the baby.

Therefore let us make a concerted effort to understand the meaning and importance of safe motherhood.
— Charkha Features