India   All India  19 Feb 2019  Kashmir JeM leadership has been killed within 100 hrs of Pulwama: Army
India, All India

Kashmir JeM leadership has been killed within 100 hrs of Pulwama: Army

Indian Army's Dhillon said, 'We will keep all options open to deal with these kinds of attacks.' 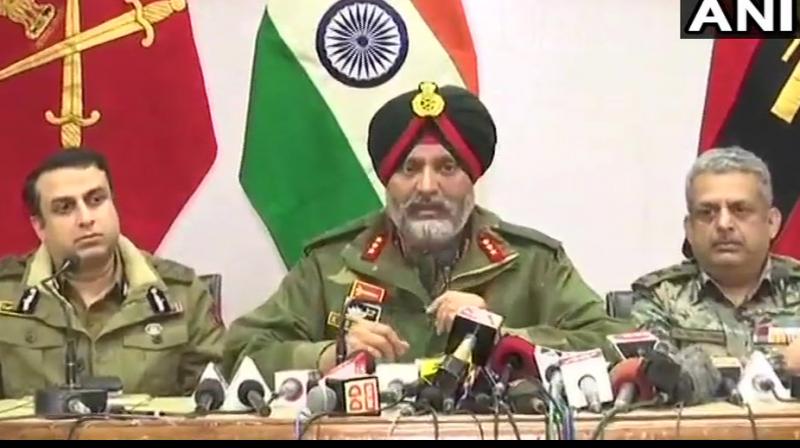 Dhillon said that they have leads on the type of explosives used but can't share the details as an investigation is underway. (Photo: ANI | Twitter)

New Delhi: Addressing the media, Kanwal Jeet Singh Dhillon, Corps Commander of Chinar Corps, Indian Army said that in less than 100 hours of Pulwama terror attack, they have eliminated JeM leadership in the valley which was being handled by JeM from Pakistan.

Dhillon said, “The type of car bomb attack that took place in Pulwama on 14th Feb, happened after a long time in Kashmir. We will keep all options open to deal with these kinds of attacks.”

Dhillon said that anyone who has picked up a gun will be killed and eliminated.

He added that they have leads on the type of explosives used but can't share the details as an investigation is underway.

“In a Kashmiri society, mother has great role to play. Through you, I would request the mothers of Kashmir to please request their sons who've joined terrorism to surrender and get back to mainstream. Anyone who has picked up gun will be killed and eliminated, unless he surrenders,” Dhillion said.

Continuing the address, Indian Army’s Dhillion said, “Our focus is clear on counter-terrorism operations. We are very clear that anyone who enters Kashmir Valley will not go back alive. There is no doubt that Pakistan Army & ISI is involved. JeM is a child of the Pakistan Army.”

CRPF’s Zulfiquar Hasan said, “Our helpline-14411 has been helping Kashmiris across the country in wake of this attack. Lot of Kashmiri students have approached this helpline for help all over the country. All Kashmiri children studying outside have been taken care of by security forces.”

“The incident happened because of an IED laden civilian car. The ROP had secured the highway. Now, SOP on civilian cars will be changed,” Hasan added.

Kashmir’s Inspector General Police SP Pani said, “There is a significant dip in recruitment, we have not see any recruitment in the last three months. The families are playing a huge role in this. We would like to urge the families and the community in curtailing recruitment.”