Agitators carrying placards against CAA, NRC and NPR, converged at Chepauk as part of their original plan to lay siege to the TN Assembly 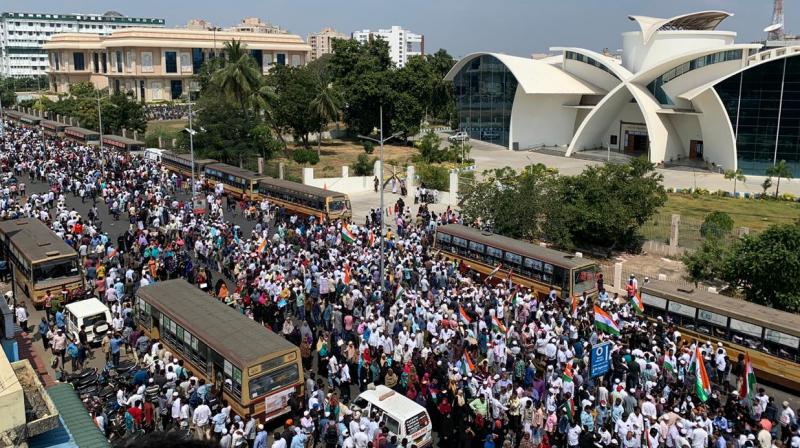 A large number of anti-CAA protesters, majority of them Muslims, held a massive protest against the amended Citizenship Act at Chepauk here, even as agitations were held across Tamil Nadu on Wednesday.

The protest call here was given by a collective of Muslim outfits. Agitators carrying placards against CAA, NRC and NPR, besides the Indian flag, converged at Chepauk as part of their original plan to lay seige to the Tamil Nadu Assembly, located inside the state Secretariat, and raised slogans against the amended law.

The Muslim outfits in the state have demanded that the state Assembly adopt a resolution against the controversial legislation in the ongoing session, concluding tomorrow.

The Madras High Court had on Tuesday restrained the Muslim outfits from going ahead with their seige protest.

Earlier, protesters converged at Chepauk here, resulting in traffic congestion at key points on the arterial Anna Salai. Security had been beefed up in and around the Secretariat.

Anti-CAA protests were held elsewhere in the state, including Madurai and Tirunelveli, with members of the Muslim community hitting the streets against the Citienship Amendment Act.