The Press Release has ignored the positive impact of extending Laws applicable to the rest of India to Jammu and Kashmir, MEA said 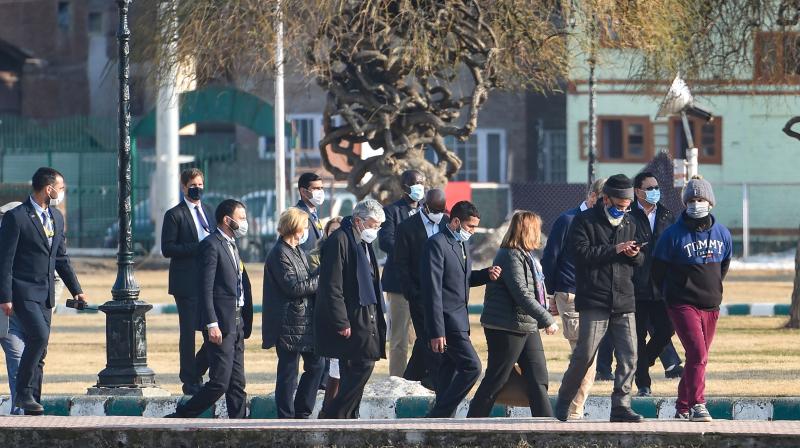 A delegation of 24 ambassadors from the European Union arrive at Hazratbal Shrine, in Srinagar on February 17, 2021. A delegation of 24 envoys of several countries in India including European Union, Latin America and Africa envoys in India arrived on a two-day visit to Jammu and Kashmir for assessing the situation following the abrogation of Article 370 in August 2019. (PTI/S. Irfan)

New Delhi: India late on Thursday night slammed a statement put out by two UN “human rights experts” on the situation in Jammu and Kashmir, saying it was “deplorable” that they “did not even wait for our (India’s) response” and “instead chose to release their inaccurate assumptions to the media”.

The statement of these experts Special Rapporteur on minority issues Fernand de Varennes, and Special Rapporteur on freedom of religion or belief Ahmed Shaheed said they were “concerned about India’s decision to end Jammu and Kashmir’s autonomy and enact new laws could curtail the previous level of political participation of Muslim and other minorities in the country, as well as potentially discriminate against them in important matters including employment and land ownership”.

Slamming the statement, the MEA said,  "We have seen the Press Release on J&K issued today by Special Rapporteur on minority issues and the Special Rapporteur on freedom of religion or belief. ... It is deplorable that the SRs, after sharing their questionnaire on 10 February, did not even wait for our response. Instead, they chose to release their inaccurate assumptions to the media. The Press Release has also been deliberately timed to coincide with the visit of a group of Ambassadors to Jammu and Kashmir.”

New Delhi further said, “As for the apprehensions of demographic change, the fact that an overwhelming majority of domicile certificates issued in J&K are to the erstwhile Permanent Resident Certificate (PRC) holders shows that these fears are baseless and unfounded. This press release calls into question the larger principles of objectivity and neutrality that the SRs are mandated by the Human Rights Council to adhere to. We expect the Special Rapporteurs to develop a better understanding of the issues under their consideration before jumping to hasty conclusions and issuing press statements.”

The two UN experts had claimed, “The loss of autonomy and the imposition of direct rule by the Government in New Delhi suggests the people of Jammu and Kashmir no longer have their own government and have lost power to legislate or amend laws in the region to ensure the protection of their rights as minorities.”