On Tuesday, Sawant took charge of the Chief Minister’s office and kept a photo of former CM Manohar Parrikar beside him. 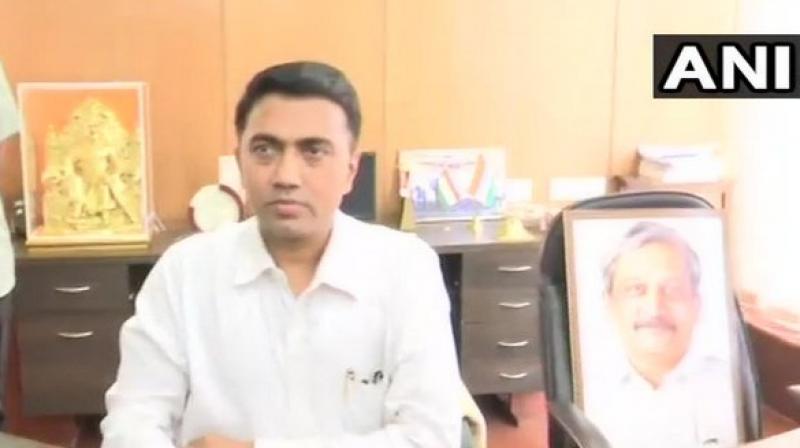 Sawant took over the Chief Minister's post in Goa after Parrikar died on Sunday evening after a prolonged battle against cancer at the age of 63. (Image: ANI)

Panaji: After assuming the chief minister’s office on Tuesday, Pramod Sawant said that he is confident of winning the floor test scheduled to take place on Wednesday in the Goa assembly

“We are going for the floor test tomorrow. There is no problem in that. There will be two deputy CMs in this government- Vijay Sardesai and Sudin Dhavalikar. And I request all the people to not congratulate me or welcome me with flowers during the 7-day mourning period,” Sawant said.

On Tuesday, Sawant took charge of the Chief Minister’s office and kept a photo of former CM Manohar Parrikar beside him.

“My first priority is to take control over the administration. My second priority will be to complete all the current projects which were started by late Manohar Parrikar,” Sawant said elaborating on the priorities of his government.

He added, “I will work to serve the last person in the society. My priority will be to provide each and every government schemes to the people.”

Sawant took over the Chief Minister's post in Goa after Parrikar died on Sunday evening after a prolonged battle against cancer at the age of 63.

BJP currently has 12 legislators and enjoys the support of legislators from Goa Forward Party (GFP), Maharashtrawadi Gomantak Party (MGP) and three independents. GFP and MGP each have three MLA's.

Congress, on the other hand, has 15 MLA's in the house and is also short of the majority mark without external support. However, it had also, for the third time in two days staked claim to form a government in Goa.

Goa Assembly has the strength of 40 members with four seats lying vacant due to deaths of two legislators, including Parrikar and resignation of two others. The by-polls on the three seats are scheduled to take place on April 23.

Previous assembly elections in Goa were held in February 2017. The next elections are due in 2022.