The NIA on Thursday called two policemen, including an aide of Mr Waze and a senior police inspector, for questioning, sources said 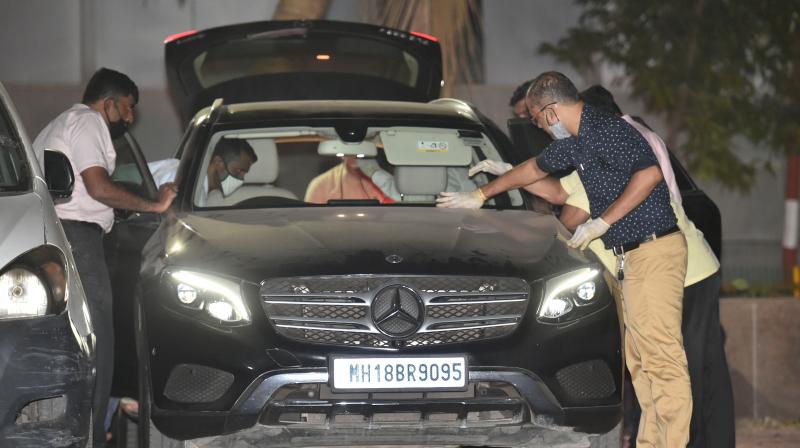 NIA officers investigate Sachin Vaze's Mercedes car following his arrest, in connection with a probe into the recovery of explosives from a car parked near industrialist Mukesh Ambanis house, in Mumbai, Tuesday, March 16, 2021. (PTI/Mitesh Bhuvad)

Mumbai: The NIA team conducting investigation into the bomb scare near industrialist Mukesh Ambani’s house has seized a second Mercedes car. This is the fifth luxury car that the NIA has seized in this case and is looking for two more cars.

The vehicles seized by NIA earlier include one Scorpio, in which explosives were found, and a Mercedes — both belonging to Sachin Waze. While it is yet unclear whether the vehicle seized on Thursday belongs to Mr Waze, sources said that the number plate of the car might have been changed.

One Toyota Land Cruiser Prado parked outside Mr Waze's residence in the Saket area of adjoining Thane has also been seized. A video dated February 26 shows footage of outside the crime branch in which Mr Waze and Mansukh Hiren can be seen arriving at the unit in the said Land Cruiser Prado.

The NIA on Thursday called two policemen, including an aide of Mr Waze and a senior police inspector, for questioning, sources said.

On Thursday, Mr Waze through his lawyer approached the special NIA court seeking permission to speak to his lawyer privately. The judge heard arguments from Mr Waze's lawyer Sunny Punamiya and Special public prosecutor Sunil Gonsalves for a short period and posted the plea for hearing again on Friday.

The NIA arrested Mr Waze on Saturday night in connection with the security scare outside the south Mumbai residence of Mr Ambani.

Mr Waze has also been facing heat in the murder case of Thane-based businessman Mansukh Hiran, who was in possession of that SUV. Hiran was found dead in a creek in Thane district on March 5.

The ATS is investigating the Hiran murder case. It had registered an FIR against unidentified persons days after Hiran's body was found. Hiran's wife accused Mr Waze of involvement in her husband's suspicious death.