‘Mulayam a real sevak, not fake like Modi; make him win’: Mayawati

The Samajwadi Party founder Mulayam Singh Yadav said, 'it will be a historic day'. 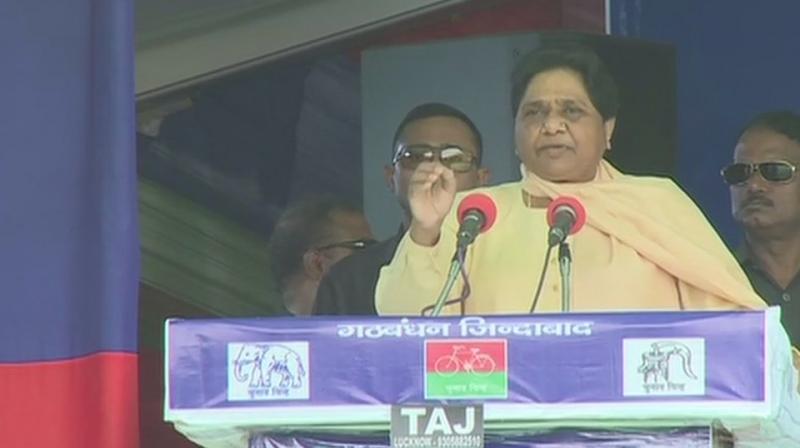 It will be the first time that Mulayam will share the stage with Mayawati since 1995 when the infamous guesthouse incident took place in Lucknow. (Photo: ANI | Twitter)

Mainpuri: After being political rivals for over 24 years, Samajwadi Party founder Mulayam Singh Yadav and Bahujan Samaj Party supremo Mayawati shared a stage at a joint rally of the BSP-SP alliance in Mainpuri on Friday.

Forgetting his rivalry with Mayawati, Yadav said that, “After a long gap we are together. I welcome her as she came to seek vote for me.”

Yadav said that he would remain obliged to Mayawati for coming to seek vote for him.

“I want to clarify why I came here despite the guest house case. In the interest of movement we have to take tough decision. We have thus decided and now want to say that Mulayam Singh Yadav had united many in his party. Most people here hold him as his leader. He is not a fake backward like Narendra Modi,” said Mayawati.

Attacking Prime Minister Narendra Modi, she said, “PM Modi is fake backward and came to power. Thus Dalit and backward are not getting benefit in jobs. It is necessary to differentiate in fake and real backwards. We have to look for real leader for backward.”

She said that Mainpuri is the old seat of Mulayam Singh Yadav and he has done development.

“Despite age, he never left Mainpuri and is determined to serve Mainpuri as a real sevak. He is not fake like Modi. Vote for Mulayam and do not forget cycle. Make him win,” Mayawati urged voters.

“Nation is passing through sensitive time. Agriculture is the backbone but farmers are being cheated. BJP talks of creating a new nation but we want to have new Prime Minister to make a new nation,” said Akhilesh.

It was the first time that Mulayam will share the stage with Mayawati since 1995 when the infamous guesthouse incident took place in Lucknow.

In 1995, Samajwadi Party workers allegedly attacked a guest house where Mayawati was campaigning with her supporters. The attack led to Mayawati’s decision to withdraw from the government and join hands with the BJP.

Mulayam Singh is contesting Lok Sabha elections from Mainpuri had stayed away due to “health issues” from the three joint rallies held earlier in Agra, Badaun and Deoband.