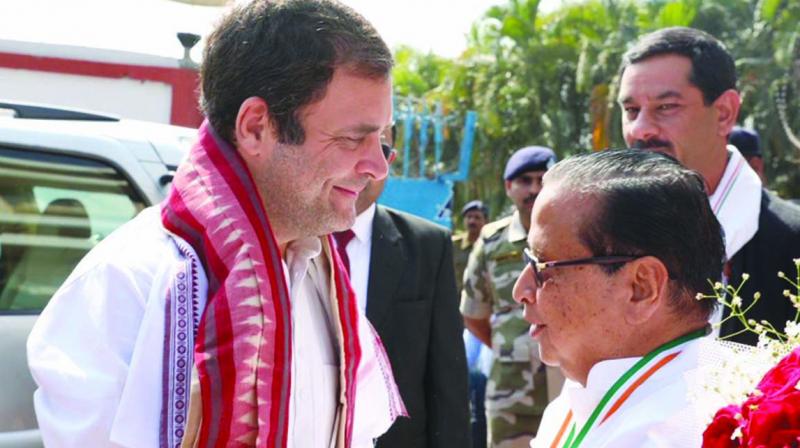 Bhubaneswar: The Congress seems to have squandered a golden opportunity to make a comeback to power in Odisha. On a decline in the state since 2000 when it lost power to the BJD following bitter infighting among its top leaders, the party has utterly failed to put up a fight this time against rivals - the ruling Biju Janata Dal and the Bharatiya Janata Party (BJP).

Pre-poll desertions, delay in release in candidates’ list and wrong selection of candidates have added to the woes of the party that now vainly hopes to win some seats, a little more than its tally of 16 it won in the 147-member Assembly in 2014, to save honour.

Despite facing challenges, the state Congress leaders put up a brave front. “Despite desertions and betrayal by some sitting MLAs, we will spring a surprise and get a majority to form the government. The voters are with us as they find the BJD a party of corruption and nepotism and the BJP a party of non-performers,” said state Congress spokesperson Arya Kumar Gyanendra.

As early as December 2018, it appeared that the Grand Old Party had given up hope of bouncing back as the party’s Odisha in-charge Jintendra Singh withdrew from the state’s political scene to concentrate in his Lok Sabha constituency in Rajasthan, handing over interim responsibility to  Chhattisgarh leader T.S. Singh Deo.

Mr Singh Deo, known as a mild, gentleman politician, has not been able to hold the flock together and witnessed many top leaders of the party, including its working president Nabakishore Das and some sitting MLAs, switching sides to join the BJD and BJP.

Indecisiveness of the party’s state leadership has led to wrong placement of candidates in many Lok Sabha constituencies and Assembly segments, resulting in the nominees finding it difficult to cope up with “alien” political atmosphere.

While there was a big rush for BJP and BJD tickets, the Congress literally struggled to find candidates to field in all the 140 Assembly constituencies it decided to fight on Its candidates from Barachana, Tirtol and Kakatpur returned tickets complaining late distribution of tickets.

Of the total 147 Assembly seats, the Congress has left seven seats to its allies the CPI, the CPI(M) and Jharkhand Mukti Morcha. And, of the total 21 Lok Sabha seats, it has given one each to the CPI and CPI(M).

The Grand Old Party received a big jolt when state Congress women wing president Sumitra Jena on April 9 resigned from the party and joined the BJD complaining inadequate representation of women in ticket distribution. She even accused Congress president Niranjan Patnaik and senior leader Narasingha Mishra of promoting their sons by giving tickets to them to contest from Balasore and Bolangir Lok Sabha seats.

On the campaign front, the Congress has failed to match the aggressive canvassing by the BJD and BJP. While chief minister Naveen Patnaik is leading his party’s campaign from the front, Prime Minister Narendra Modi and BJP president Amit Shah, looking for at least 10-plus Lok Sabha seats, and 120 Assembly seats, have almost made Odisha their second home in the past few days by regularly visiting and addressing public rallies. Both the BJP leaders have visited the state at least five times in the past 15 days to woo voters.

Congress president Rahul Gandhi, who addressed at least four public meetings, cancelled his Kandhamal trip for unknown reasons. This  shattered the morale of the party workers in central parts of the state and is likely to affect the poll prospects, say analysts.

Decimated from second position to third position in the 2017 rural polls, the Congress is now concentrating to win at least 30 Assembly seats so as to remain in the reckoning in state politics, observe political analyst Kishore Chandra Swain.