Pragya claimed that due to several narco, polygraph, and brain-mapping tests conducted on her, she was diagnosed with cancer. 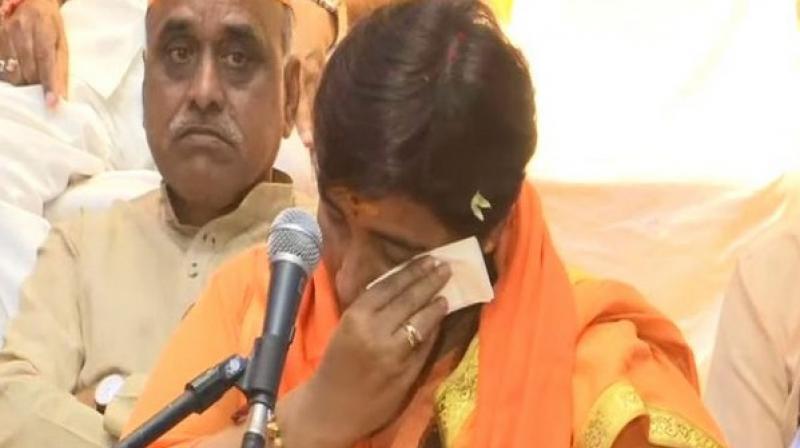 She also claimed that she was beaten because the interrogators wanted her to confess that she had carried out a blast and killed Muslims. (Photo: ANI)

Bhopal: Malegaon blast accused Sadhvi Pragya Singh Thakur on Thursday broke down while recalling the ‘torture’ she faced in the custody of law enforcing agencies.

Interacting with BJP workers here, Thakur said: “When they took me away illegally, they kept me for 13 days. On the first day itself, they started beating me. When they used to hit me with a belt, the entire nervous system used to go blank. They used to beat me day and night.”

“They used to hurl abuses while beating me. They used to threaten me to hang me upside down. I was threatened to be stripped off. It is unbearable for me to recall the torture I suffered in the custody,” she said in a choked voice.

Thakur, whom the BJP has fielded against Congress veteran Digvijaya Singh from Bhopal Lok Sabha seat, said:  “I am not recalling my pain before you but all I am saying is that no sister should undergo what I have faced.”

She also claimed that she was beaten because the interrogators wanted her to confess that she had carried out a blast and killed Muslims.

“I never knew why they were beating me? The only reason which I later got to know was that they wanted me to say that I have carried out an explosion and killed Muslims. This was their politics. This was their act of sedition. This was their conspiracy to break the country,” she said.

“They kept asking me -- You carried out those explosions. I said -- I did not. Then they said that you are a terrorist. RSS is a terrorist organisation. I realised that Hindutva was being targeted,” said Sadhvi.

She said: “They used to beat me for the entire night and stopped only when they feared that now blood would begin to come out from my hands. They used to bring hot water, mix salt in it and then they used to dip my hand in that so that they become soft and they can beat me again.”

Pragya claimed that due to several narco, polygraph, and brain-mapping tests conducted on her, she was diagnosed with cancer.

“Three narco tests, three polygraph tests, and three brain-mapping tests were conducted on me. These are tests where chemical are injected into your body, which causes cancer,” she said.

She further alleged that there were attempts to kill her on the pretext of an encounter.

“They tried to encounter me. I thought it will not matter even if they will kill me but I won’t let them reach the heart where the Mother India lives,” said Pragya.

Urging the people to stay vigilant from those who are trying to brand “saffron” colour as terrorism, she said: “Our nation is in danger because of these traitors. Our soldiers sacrifice themselves for us, but they question their valour. They praise the enemy country.”

Taking a dig at Congress candidate from Bhopal and former Madhya Pradesh Chief Minister Digvijaya Singh, she said: “Will we allow such “vidharmis” to stay in Bhopal? Sixteen years ago, you saw the rule of someone for 10 years. Forget vehicles. He doesn’t even have the right to walk barefoot here.”

“If you want our Bhopal safe, then remove such people, and chase them away. Don’t tolerate them. If you want Bhopal to prosper, then even their shadow should not fall here.”

Terming the Lok Sabha election as “Dharm Yudh,” Thakur said: “I am not contesting elections. I am a ‘sanyasi.’ This is a ‘Dharm Yudh.’ I am here considering it as the order of god. I am not here to do ‘netagiri.’ I have been instructed by the god to take part in this Dharm Yudh.”

Sadhvi also said that she was begging to the people for their votes.

“I beg because I am a sanyasi. So, I will beg for one vote for the nation, vote for the integrity of the country. If ‘vidharmis’ win, then we will not be able to show our face to our children,” she said.

Thakur is among the seven accused facing trial in Malegaon blast case, wherein six people were killed and a dozen others were injured. A bomb placed on a motorcycle exploded in Maharashtra’s Malegaon on September 29, 2008.

Bhopal will go to polls on May 12. The results will be announced on May 23.