Arvind Kejriwal had opposed the demonetisation move as it threatened to ‘derail’ his ‘money laundering’ attempts, Mishra said. 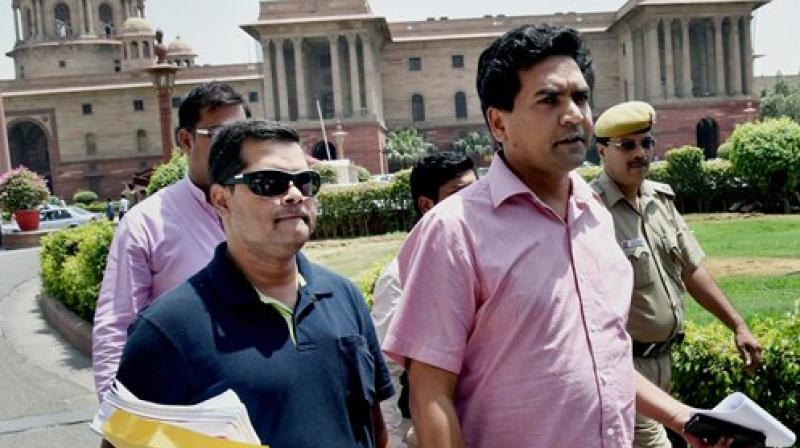 Sacked Delhi minister Kapil Mishra outside the the Mnistry of Finance at North Block in New Delhi on Wednesday. (Photo: PTI)

Mishra told a press conference that the AAP had got money funnelled through shell companies and wondered how it accepted donations from companies that were slapped notices ‘for not paying VAT’.

"Why did he (Kejriwal) fiercely oppose demonetisation? Why did he travel across the country against the move? Because his men, who hoard black money, were being raided by enforcement agencies," he claimed.

Kapil, who has been suspended from the AAP, also alleged that Delhi-based businessman Mukesh Kumar, who claimed to have donated Rs 2 crore to AAP in 2014, was merely a mask for ‘proclaimed black money offenders’.

"Ten days before AAP took office in 2013, Mukesh Kumar's company was slapped a notice by the Delhi government for not paying VAT. And then this person goes on to donate Rs 2 crore to AAP," he said.

He also questioned Kejriwal and Deputy Chief Minister Manish Sisodia for not acting against Mukesh for defaulting on VAT after coming to power in 2013.

Kejrwal's first stint as Delhi CM ended within 49 days after he quit over the Congress and BJP allegedly blocking the passage of the Jan Lokpal Bill.