India   All India  19 May 2017  Give befitting reply to Pak misadventures across border: Jaitley to troops
India, All India

Give befitting reply to Pak misadventures across border: Jaitley to troops

Jaitley was on a visit of the LoC in Rampur sector of Baramulla district. 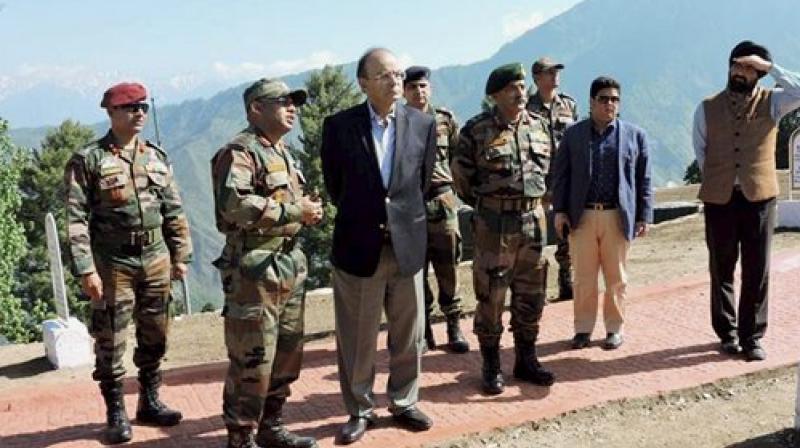 Defence Minister Arun Jaitley with GOC of Baramulla based Division, Maj Gen RP Kalita during a visit to the forward areas of Rampur Sector of North Kashmir on Friday. (Photo: PTI)

Srinagar: Defence Minister, Arun Jaitley, on Friday asked the troops defending the Line of Control (LoC) in Jammu and Kashmir to sustain 'tight vigil' along the de facto border, thwart attempts of infiltration and give a 'strong and befitting' reply to any misadventure from across by Pakistan.

Jaitley was on a visit of the LoC in Rampur sector of Baramulla district. Accompanied by GOC of Baramulla-based Army division, Maj. Gen. RP Kalita, the Defence Minister interacted with the troops and "praised their grit, determination and selfless service to the nation”, defence spokesman Colonel Rajesh Kalia said.

The Defence Minister expressed his happiness to be amidst the soldiers and said that the entire country recognised the challenging circumstances that they were operating in and stood behind them in all their endeavours, the spokesman said.

“He reiterated the need to maintain strict vigil at all times to thwart any nefarious designs of forces inimical to national interests,” the spokesman said. Parts of the 740-km long LoC witnessed escalation in tensions following the beheading of two Indian soldiers allegedly by Pakistan army’s Border Action Team (BAT) on May 1 and subsequent skirmishes in which several civilians were killed and have forced the border dwellers to desert their shell-hit hamlets, mainly in Rajouri district.

Jaitley was on a two-day visit of restive Jammu and Kashmir during which he and Army Chief General Bipin Rawat held a series of meetings with local commander to review the security situations along the LoC and in the hinterland in the backdrop of unending student protests and streets clashes and a series of recent terror strikes by militants including the murder of a young Kashmiri Muslim Army officer Lieutenant Ummer Fayaz Parry. The issues were discussed threadbare also at his one-on-one meeting with Chief Minister, Mehbooba Mufti.

At a meeting with senior Army commanders held at Srinagar’s Badami Bagh cantonment on Wednesday, he had asked the Army and other security forces to go all out against militants and terrorists and target them wherever they are in Jammu and Kashmir. He had also stressed upon the need to sustain 'tight vigil' along the Line of Control (LoC) and the International Border (IB) with Pakistan and thwart any attempts of infiltration from across the borders. The government has already given the Army and the Border Security Force (BSF) a free hand to respond to any ‘misadventure’ from across the borders, the sources here said.

Jaitley, however, also asked the security forces that while going tough against militants they should avoid collateral damage during counter insurgency operations in J&K and 'ensure safety of the innocent people while dealing firmly with the inimical elements' and step up people-friendly initiatives under its Sadhbhavana campaign.

Apart from the Army Chief, the Defence Secretary (designate) Sanjay Mitra also attended the security review meetings and the briefing held at the headquarters of the 15 Army Corps which is also known as Chinar Corps. Jaitley was during the briefing apprised of the various measures initiated to strengthen the robust counter infiltration grid along the LoC. “He was also briefed on the close coordination amongst all the government agencies towards bringing back normalcy in the region,” the defence spokesman said.