India   All India  19 May 2017  No room for criminals, will ensure law, order: Yogi takes on Oppn in UP Assembly
India, All India

No room for criminals, will ensure law, order: Yogi takes on Oppn in UP Assembly

The Congress party also asserted that the BJP had failed to come up to the expectations of Uttar Pradesh. 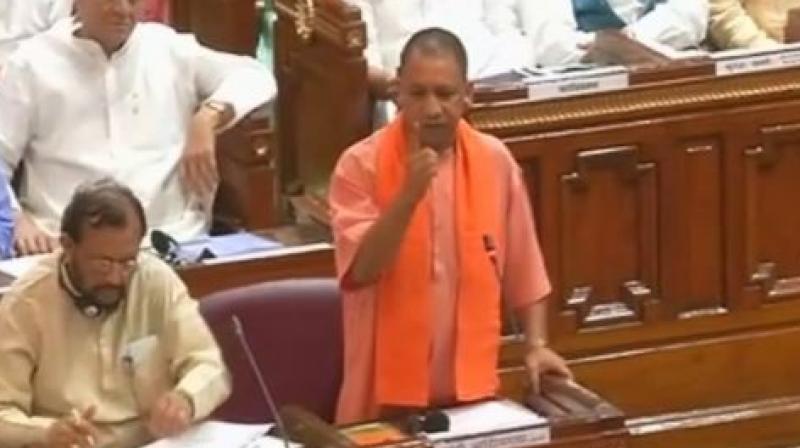 Lucknow: Taking on the Opposition in Uttar Pradesh, which has been creating a ruckus in the Assembly over the law and order situation in the state, Chief Minister Yogi Adityanath on Friday assured a strict action against the criminals.

"Those who have ruled the state for five to ten years want to know what we have achieved in two months. I admit that certain incidents have taken place in the state, but we are taking a stringent action. We will ensure that no room is given to criminals to operate," Adityanath said.

Asserting that it was difficult to completely curb criminal activities that were given a free hand in the past 15 years, the Chief Minister said the government would ensure that law and order was maintained.

"It is difficult to completely curb something which has been in existence for the 10 to 15 years. Since it is in the final stage, that is why some late activity is observed. But I want to ensure that the government's promise of good governance and development will be established," he added.

The maiden session of the 17th Uttar Pradesh Assembly witnessed a stormy start on Monday with the Opposition parties creating an uproar on the floor of the House.

Denouncing the Adityanath-led Government over the law and order in the state and other issues, the slogan-shouting Opposition members trooped into the well, despite speaker Hridaya Narain Dixit's appeal for an all-party meeting to ensure smooth proceedings.

Agitating Opposition members even hurled paper balls at the podium and the marshals trying to dodge them away with files. The uproar was such that Governor Ram Naik address also drowned in the noise.

Accusing the BJP Government in the state of failing to keep the law and order in the state intact, the Samajwadi Party said that it opposed the proceeding of the House to express displeasure over the poor governance of the Adityanath dispensation.

The Congress party also asserted that the BJP had failed to come up to the expectations of Uttar Pradesh and hence, should not make tall claims about its success.

The Uttar Pradesh Assembly session, which was scheduled to end on May 22, will be concluded tomorrow.