India   All India  19 May 2018  Drive against child marriages going nowhere
India, All India 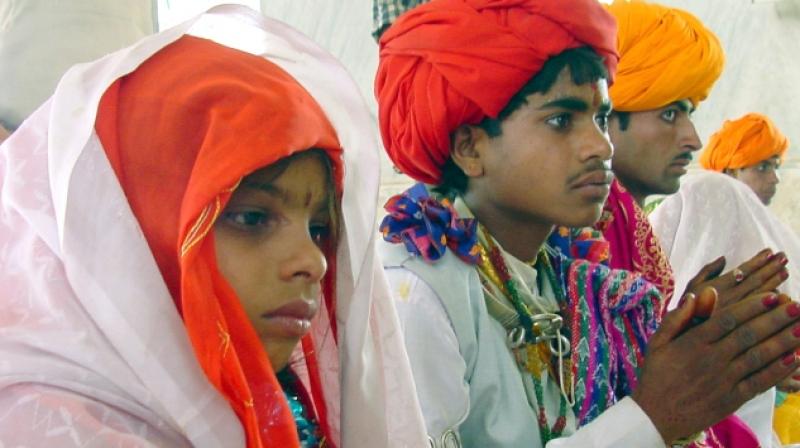 Analysts say that Jharkhand continues to have a high percentage of child marriages despite a drop in other parts of the country.(Representational image)

Ranchi: The surge in cases related to child marriage has become a major cause of concern for the state government of Jharkhand whose efforts have failed to yield desired results.

Analysts say that Jharkhand continues to have a high percentage of child marriages despite a drop in other parts of the country.

Figures show that West Bengal tops the national list of highest child marriage cases at 40.7 per cent, 39.1 per cent cases of child marriage were recorded in Bihar, where a massive campaign to curb the menace was launched by the state government recently, and Jharkhand is third in the list with 38 per cent.

Concerned over the issue the state health department recently directed all district-level officials to take adequate measures in order to stop cases related to child marriage.

Elaborating on the reasons that fuel child marriage, Mohua Chatterjee, programme head of east India operations at CRY, said that children between the 10-18 years are vulnerable as incidents of dropping out from school are highly prevalent in this age group.

She said, “Protection of the girl child from any sexual violence, the fear of eloping and difficulty in accessing higher education are the contributing factors of early marriages. Therefore, the community and families have a larger role to play to crub the menace.”

According to a recent survey conducted by the state government, around 38 per cent women who got married were below 18 years of age. The stringent Prohibition of Child Marriage Act has also failed to serve as a deterrent. It came into force in the state in 2006 and carries a maximum punishment of two years and a fine of up to `1 lakh for contracting a child marriage.

“Cases of child marriages in the state have been taken seriously and we assure everyone that strict measures will be taken to stop such kind of activities,” said Nidhi Khare, principal secretary, health and family welfare.

As part of an initiative, the health department also introduced a helpline number — 104 to provide assistance and legal help to the victims of child marriages.

Civil surgeons have also been asked to conduct counselling sessions at the district level to educate relatives of underage girls about its ill effects. Deputy commissioners have been asked to discuss the issue in panchayat level meetings.