Senior advocate P. Chidambaram wanted the court to restrain Mr Yeddyurappa from recommending or nominating any Anglo-Indian member to the Assembly. 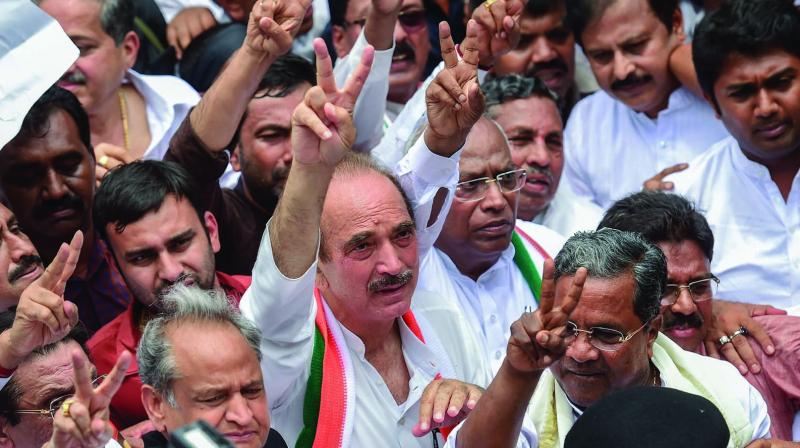 New Delhi: The Supreme Court on Friday directed Karnataka chief minister B.S. Yeddyurappa to face a floor test in the state Assembly at 4 pm on Saturday to prove his majority.

A three-judge bench of Justices A.K. Sikri, S.A. Bobde and Ashok Bhushan, passing orders on petitions filed by the Congress and Janata Dal (Secular), directed the immediate appointment of a pro-tem Speaker to conduct the floor test in accordance with Karnataka Assembly rules. It also laid down clear-cut four-step instructions for holding the floor test in the Assembly on Saturday.

The bench, after perusing the letters written by Mr Yeddyurappa to state governor Vajubhai Vala on May 15 and 16, made it clear that whether the state governor’s decision to invite the single largest party to form the government was correct or not would be decided later. The bench directed the matter to be listed after 10 weeks after all the pleadings are completed.

The court also recorded an undertaking from senior counsel Mukul Rohatgi, appearing on behalf of the BJP and Mr Yeddyurappa, that the chief minister would not take any policy decisions till the floor test is conducted. The bench rejected Mr Yeddyurappa’s plea for a secret ballot in the floor test. Mr Rohatgi produced the letters by Mr Yeddyurappa to the governor, which said: “I have the support of BJP MLAs and others to prove the requisite majority. The BJP is the single largest party and it is a mandate for change.” He argued that the discretion of the governor to invite the leader of the single largest party could not be called into question.

Mr Rohatgi said there was no need to name the MLAs supporting the BJP at present and that the Supreme Court was not the forum for such an action, and that it would be proven on the floor of the House.” Ultimately it is the numbers game and the governor needs to see which side has the numbers,” Justice A.K. Sikri said.

Mr Rohatgi, however, insisted that there was an “unholy alliance” between the Congress and the JD(S) and that 95 per cent of the people wanted a change. He said there was an atmosphere of fear and that MLAs were being threatened and not being allowed to vote according to their conscience. “We will prove our majority and there is no doubt on this”, he added.

Mr Rohatgi also questioned the veracity of the signatures of 115 MLAs (of the Congress and JD-S) and said in the list of 117, two had not signed. Of those who had signed, there was a doubt whether these were genuine or not, he claimed. Additional solicitor-general Tushar Mehta, who appeared for the state government, said the “governor never received signed letters by Congress-JD (S). What was received was only a list of MLAs”.

Dr Abhishek “Manu” Singhvi, arguing for the Congress-JD(S) combine, said that there was “no such thing as the governor’s discretion”. When two lists, one with majority support and another with 104 MLAs were there, the governor was bound to go by the majority and not invite the leader of the single largest party. Senior counsel Kapil Sibal endorsed Dr Singhvi’s submissions and questioned the governor’s action.

Justice Sikri told the counsel: “Whosoever might have been called, the final test is on the floor of the House. We will call for the floor test tomorrow itself.”

Senior advocate P. Chidambaram wanted the court to restrain Mr Yeddyurappa from recommending or nominating any Anglo-Indian member to the Assembly. However, Mr Mehta clarified that there was no such proposal at present.

Mr Ram Jethmalani, appearing in his personal capacity, questioned the action of the governor and said it was unconstitutional.

In a brief order, the bench said: “In a matter like this, a detailed hearing is required to decide as to whether the action of the governor in inviting respondent no. 3 (Mr Yeddyurappa) to form the government was valid in law or not. Since it may consume substantial time and the final decision cannot be given immediately, we deem it proper that the floor test to ascertain the majority of one or the other group is conducted immediately and without any delay.”

The court said though the governor has given him 15 days’ time to prove his majority on the floor of the House, having regard to all the circumstances of this case, “we are of the view that such a floor test be conducted tomorrow itself (that is on 19.05.2018.”

It said that since the elected Members of the Legislative Assembly are yet to take the oath and the Speaker is also yet to be elected, the court directed that a pro-tem Speaker should be appointed for the aforesaid purpose immediately.

The court said: “All the elected members shall take the oath tomorrow (19.05.2018) and this exercise shall be completed before 4 pm. The pro-tem Speaker shall conduct the Floor Test on 19.05.2018 at 4 pm in order to ascertain the majority. Adequate and sufficient security arrangements shall be made and the director-general of police, State of Karnataka, will himself supervise the said arrangements so that there is no lapse on this count whatsoever.”