Also, as many as 106 new positive cases surfaced across the Union Territory (UT) including 49 policemen and five doctors 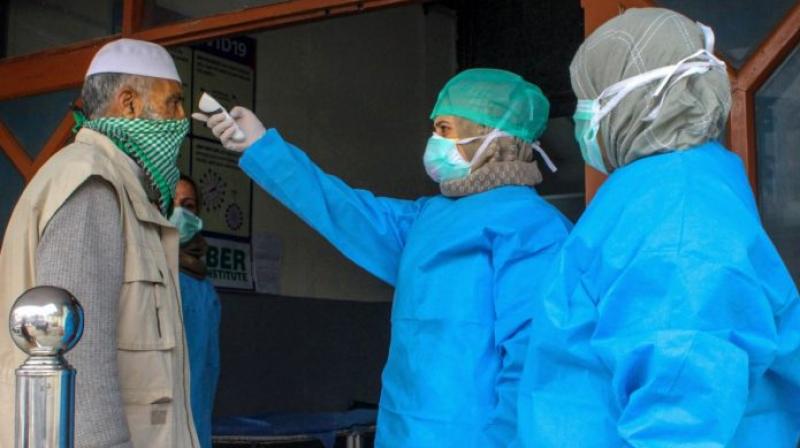 SRINAGAR: Jammu and Kashmir on Monday reported three more deaths due to Novel Coronovirus or Covid-19, taking the toll to sixteen.

Also, as many as 106 new positive cases surfaced across the Union Territory (UT) including 49 policemen and five doctors during the day.

It is for the first time since the outbreak of the pandemic that three patients died in a single day in the UT. The victims include two elderly women from southern Kulgam and Anantnag districts who died in a Srinagar hospital hours after testing positive. While one of them was suffering from prostate cancer, the other was a case of subdural haemorrhage (SDH) but both had also tested positive for Covid-19, the hospital sources said.

Earlier in the day, a 75-year-old man from Hillar Kokernag area of Anantnag district died at Srinagar’s government-run Chest Disease Hospital, days after testing positive for the deadly virus.

On Sunday, a 29-year-old woman from Srinagar’s Habba Kadal had died at the same hospital to become the youngest victim of the dreaded disease in J&K, so far.

A government spokesman said that J&K recorded 106 new positive cases of Covid-19 including 122 from Jammu division and 94 from the Kashmir Valley on Monday, thus taking the total number of the patients in the UT to 1,289. He said that of these cases, 665 are “active positive”, 609 have recovered and 16 have died.

Ladakh has separately reported more than forty Covid-19 cases, so far. However, the doctors in Leh said that most of them have recovered.

The hospital sources said that among those who tested positive in J&K on Monday are five doctors and 49 policemen of the J&K police’s armed wing including an SP ranked officer. Half a dozen police personnel had been admitted to the hospital after contracting the virus earlier.

The police personnel who tested positive were stationed at the District Police Lines in Anantnag and other places and are aged between 25 and 56 years, the sources said.

Three of the five doctors who tested positive had treated the Srinagar woman who died of Covid-19 on Sunday, the hospital sources said.