However, Goldman Sachs added that India’s GDP will rebound by 20% in the third quarter of the year. 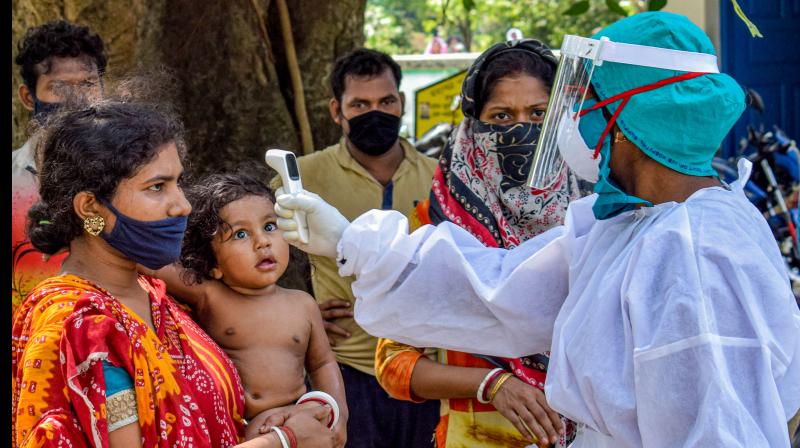 A health worker conducts thermal screening of migrants travelling from Mumbai to their native places, during the ongoing COVID-19 nationwide lcockdown, in Nadia district. (PTI)

New Delhi: With the World Health Organisation officials saying that novel coronavirus may be here to stay for a longer time, several countries have started easing up their lockdowns and reopening economies. In India too, despite rising number of COVID-19 cases that are now close to 1 lakh, in spite of 55 days of lockdown, several state governments have decided to allow economic activities to boost employment and revenue during Lockdown 4 from May 18-31.

Despite a massive economic package announced by union Finance Minister Mrs Nirmala Sitharaman, Goldman Sachs has predicted that India will suffer its most severe recession since 1979 this fiscal year due to the COVID-19 pandemic and Lockdown impact on the industries. It said Indian economy will shrink by 45% on an annualized basis this quarter and its GDP will slump 5% this fiscal year, which would be its steepest contraction in 41 years. However, Goldman Sachs added that India’s GDP will rebound by 20% in the third quarter of the year once economic activities are back on track.

“We have to gradually move towards opening the economy. We used the lockdown period to make arrangements to deal with COVID-19," said Delhi Chief Minister Mr Arvind Kejriwal as he announced a slew of measures to allow economic activities in the National Capital on Monday.

This comes after the Ministry of Home Affairs (MHAA) on Monday allowed state governments to form their own rules for economic activities and decide on red, orange and green zones without diluting the Centre’s guidelines. MHA added that even within the containment zones, strict perimeter should be maintained and only essential activities should be allowed while during Lockdown 4. It has said opening of malls, cinema halls, restaurants, flights, trains, metros, schools and colleges would continue to be prohibited throughout the country.

Keeping in line with Centre’s guidelines, most of the states have decided to keep only their containment zones sealed and let people be free in other areas with abundant precaution and measures of social distancing.

Balancing between health and economics, states like Delhi that has over 10,000 cases and Karnataka have decided to allow substantial economic activities and movement of people. E-commerce, construction activities, intra-city movement of people in private and public transport, opening of shops are some of the relaxations that Delhi and Karnataka Chief Ministers announced on Monday. Delhi CM Arvind Kejriwal said the state government will continue to strengthen its health infrastructure to deal with the higher number of cases that are expected due to relaxations in rules.

While Karnataka has even allowed open of salons and barber shops, it has banned entry of people from Maharashtra, Gujarat, Tamil Nadu and Kerala till May 31 due to high number of cases in these states. This comes after MHA has allowed inter-state movement of passengers with “mutual consent between the states”.

Maharashtra, Gujarat, Tamil Nadu that continue to report very high number of cases too are slowly opening up with caution. The states are now intensifying their testing. The Indian Council of Medical Research on Monday revised its testing strategy for COVID-19 by now adding foreign returnees and migrants who show symptoms for influenza-like illness (ILI) to be tested within seven days of ailment.

Asymptomatic direct and high-risk contacts of a confirmed case have to be tested once between day 5 and day 10 of coming into contact while all frontline workers involved in containment zones, and all hospitalised patients who develop ILI, and all patients of Severe Acute Respiratory Infection (SARI) too have to be tested. The ICMR also stressed that no emergency clinical procedure, including deliveries, should be delayed for lack of testing.

As per government data, India till Monday morning had reported overall 96,169 cases and 3029 deaths with another high of 5242 fresh cases and 157 deaths in one day. According to PTI’s late evening data the total numbers were 96566 while covid19india.org said there were 97621 cases and 3058 deaths.