Tauktae, characterised as an extremely severe cyclonic storm on Monday, has now weakened into a 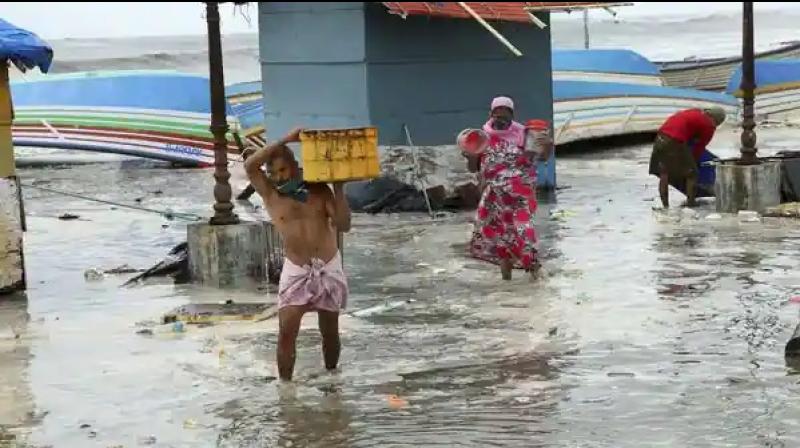 Tauktae triggered heavy rains in many parts along its way from the Saurashtra coast to North Gujarat. (Photo: File/PTI)

Ahmedabad: As many as 13 people were killed in Gujarat as cyclone Tauktae pummelled parts of the state and left behind a trail of destruction along the coast, uprooting electric poles, trees and damaging thousands of houses and roads, officials said on Tuesday.

In what was one of the worst cyclones faced by the state, Tauktae triggered heavy rains in many parts along its way from the Saurashtra coast to North Gujarat with as many as 46 talukas receiving over 100 mm of downpour, while 12 of them recorded 150 mm to 175 mm of rains.

Tauktae, characterised as an extremely severe cyclonic storm on Monday, has now weakened into a "cyclonic storm" and will gradually become a "deep depression" as it moves northwards, the India Meteorological Department (IMD) said.

Even as Tauktae's intensity weakened, it left behind a trail of destruction with as many as 13 people losing their lives in different parts of Gujarat, including Bhavnagar, Rajkot, Patan, Amreli and Valsad, officials said.

Over 16,000 houses were damaged, more than 40,000 trees and over 70,000 electric poles uprooted, while 5,951 villages faced total power blackout due to the cyclonic storm in Gujarat, Chief Minister Vijay Rupani said.

In his media briefing, Rupani said officially the death toll due to the cyclone stood at 13.

A woman died when an electric pole fell on her while she was sleeping in Patan town late Monday night amid strong wind, an official from Patan A-division police station said.

A woman and her daughter were killed when the wall of their house collapsed at Badeli village in Palitana taluka of Bhavnagar, a local administration official said.

In another incident, a girl died after the roof of her house collapsed on four members of the family at Rajula in Amreli district on Monday night, police said.

In Sanand town of Ahmedabad district, an unidentified man in his 30s and a woman, believed to be his relative, died on the spot when a live wire got dislodged from the pole and fell on them near a complex on Sanand-Bavla road, said police.

A woman and her teenage daughter died after coming in contact with a live electricity wire in Nadiad town of Kheda district. The deceased were identified as Taraben Bhil (35) and her daughter Asha (16), said Nadiad town police.

Government officials did not provide the details of the other five deaths.

The landfall process of the eye of the extremely severe cyclonic storm Tauktae, which hit the Gujarat coast in the Saurashtra region between Diu and Una, ended around midnight on Monday, the IMD said.

The remnant of the weather system is very likely to move north-eastwards across Rajasthan to west Uttar Pradesh during May 19 and 20, said the Ministry of Home Ministry in its advisory.

As of Tuesday evening, the cyclonic storm lay centred over Saurashtra, around 35km west of Ahmedabad, 80km east- northeast of Surendranagar, and 120 km south-southeast of Deesa, with the wind intensity now reduced to 60-70 kmph gusting to 80 kmph, the IMD said.

The IMD said districts such as Amreli, Bhavnagar, Navsari, Valsad, Sabarkantha, among others in Gujarat, and Daman and Dadra and Nagar Haveli in the neighbouring Union Territory as well as Sabarkantha, were likely to receive heavy to very heavy rainfall.

The cyclone completed the landfall in Gujarat at 1:30 am on Tuesday, Additional Chief Secretary (Revenue) Pankaj Kumar said, adding districts of Amreli, Gir Somnath, Junagadh, Porbandar, Rajkot, Bhavnagar, and Botad in Saurashtra were the worst affected by the natural disaster.

Rupani told reporters that 5,951 villages suffered blackout and work was underway to restore power supply in 3,850 of them.

Around 70,000 electric poles fell and four 220-KV sub stations were yet to restart out of five that suffered damage due to the storm, the chief minister said.

He said 68 out of 165 66-KV sub stations were also damaged and later made functional.

Rupani said out of 425 COVID-19 hospitals located in the affected areas, 122 suffered power blackout, out of which electricity supply in 83 was restored, and 39 others were working on backup arrangements.

Rupani assured people that loss caused to standing crops, mango and coconut farms, as well as houses and cattle will be compensated by the government, and a survey will be immediately undertaken for the purpose.

Due to the cyclone, the state received widespread rainfall, with 96 talukas receiving more than one inch of downpour, Rupani informed.

The cyclone poured very heavy rains at all places where it passed from as well as adjoining areas.

Many areas of Ahmedabad city were inundated with knee-deep water following incessant downpour since afternoon as Tauktae passed northward along the district's periphery.

The Indian Coast Guard (ICG) on Tuesday rescued eight fishermen onboard a fishing boat that drifted into the sea off the coast of Veraval harbour due to the cyclone, officials said.

Besides, two Coast Guard Chetak helicopters, operating from the CG airbase at the Union Territory of Daman, rescued eight crew members of the stranded ship 'Gal Constructor' from the sea off the Satpati coast (in neighbouring Maharashtra) amidst very rough and inclement weather conditions, a release said.

The intensity of the wind has gradually reduced but "looking at its movement, we need to take extreme precaution till night," Additional Chief Secretary Kumar told reporters. (Revenue) Pankaj Kumar.

A major cyclone in Gujarat on June 9, 1998, had brought widespread death and destruction in its wake, particularly in the port town of Kandla.

While official figures had then put the death toll at 1,173, adding 1,774 went missing, media reports, eyewitness and volunteer accounts suggested this was grossly an understatement.