15 killed as Valley sees a spurt in militant attacks

Witnesses said that the grenade missed the intended target and exploded on the road outside the police station, causing injuries to passersby. 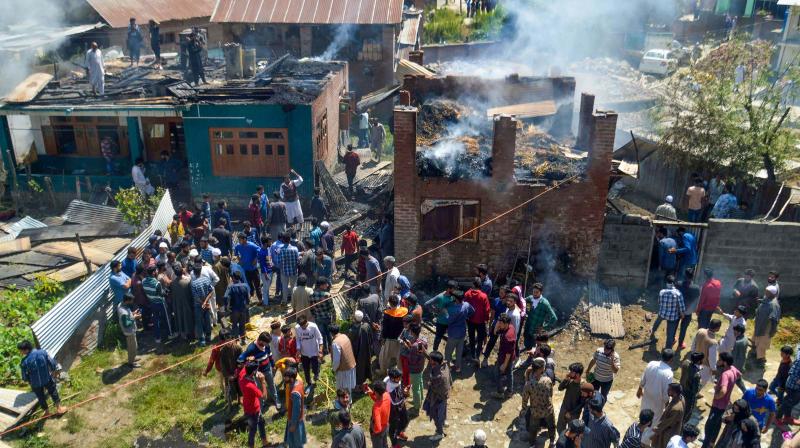 Local people gather outside the damaged houses where two top JeM militants were hiding during an encounter at Bijbehara area of Anantnag district on Tuesday. (Photo: PTI)

Srinagar: As many as 15 people, mostly security personnel, have been killed as Kashmir Valley is once again witnessing spurt in militant attacks and, on the other hand, the security forces stepped up heat on them. The slain include two officers and eight other security personnel, four militants and one civilian.

Meanwhile, two persons were injured when militants hurled a hand grenade towards a police station in Pulwama town on Tuesday evening. A statement issued by the police here said, “Terrorists today evening lobbed a grenade in Pulwama resulting in injuries to two civilians. Police immediately reached the terror crime spot. The injured civilians have been shifted to the hospital.”

Witnesses said that the grenade missed the intended target and exploded on the road outside the police station, causing injuries to passersby.

Among half-a-dozen Army jawans who were injured when targeted by militants while travelling in an ALS (Ashok Leyland Stallion 4x4 truck) through Aarihal area of Pulwama district on Monday, Havildar Amarjeet Kumar and Naik Ajit Kumar Sahoo died here on Tuesday. Defence spokesman Col. Rajesh Kalia said that the duo was brought to the Army’s 92-Base Hospital in Srinagar “with severe contusions and concussions” after Monday’s IED blast at Aarihal and succumbed to their injuries on Tuesday.

The officials said that eight more Army and CRPF personnel were injured in militant attacks and clashes with them elsewhere in the Valley since Saturday.