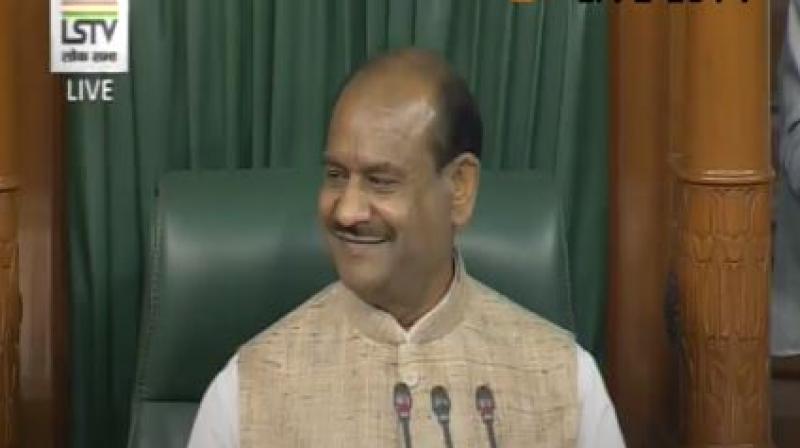 New Delhi: NDA nominee Om Birla was on Wednesday unanimously elected speaker of the Lok Sabha with Prime Minister Narendra Modi and the opposition assuring him of their whole-hearted support in the smooth conduct of proceedings in the House.

Congress leader Adhir Ranjan Chaudhary, DMK's T R Baalu and TMC's Sudip Bandyopadhyay were among those who backed Birla and urged him to be impartial as presiding officer of the lower house.

"I on behalf of the government and the treasury benches assure you full support in conducting the House. I also assure you that your order will prevail and you must be tough even if anyone from our side (treasury benches) crosses the limit," Modi said, congratulating Birla.

The Prime Minister also heaped praise on the two-time BJP MP for his long public life, going back to his student days, and recalled his social work in Kota, Rajasthan, and in other parts of the country, including during the 2011 earthquake in Gujarat and the 2013 floods in Uttarakhand.

Chaudhary, while extending whole-hearted support to Birla, urged him to be impartial and give enough time to the opposition to raise issues of public interest. He said the presiding officer is the custodian of the House, which according to Jawaharlal Nehru, represents the nation and freedom of the country.

Chaudhary also expressed concern over very few bills being referred to standing committees by the Lok Sabha and hoped for a reversal of the trend. Pinaki Mishra of the BJD also expressed similar concerns. There was no candidate in the fray other than Birla and the motion moved by the prime minister to choose the Kota-Bundi MP as the speaker was adopted by a voice vote. A total of 13 motions were moved in support of Birla. Birla was declared elected and the Speaker by pro-tem Speaker Virendra Kumar. Modi led the new Speaker to the presiding officer's chair. Several leaders from BJP, Congress, DMK, TMC went up the podium to greet Birla.

Though the Congress and the DMK had moved notices for supporting Birla as the Speaker well past the 12 noon Tuesday deadline, the pro-tem speaker allowed it to be included as a "special case".

Birla, a surprise pick for the post, won his first Lok Sabha election in 2014 and was again elected this year from Rajasthan's Kota-Bundi seat. The 56-year-old leader is considered to be close to both Modi and Bharatiya Janata Party (BJP) president Amit Shah.  He succeeds eight-term MP Sumitra Mahajan as the speaker, a post traditionally held by senior MPs.