Allocations were made for the completion of irrigation projects, promoting micro-irrigation, and setting up value chains.. 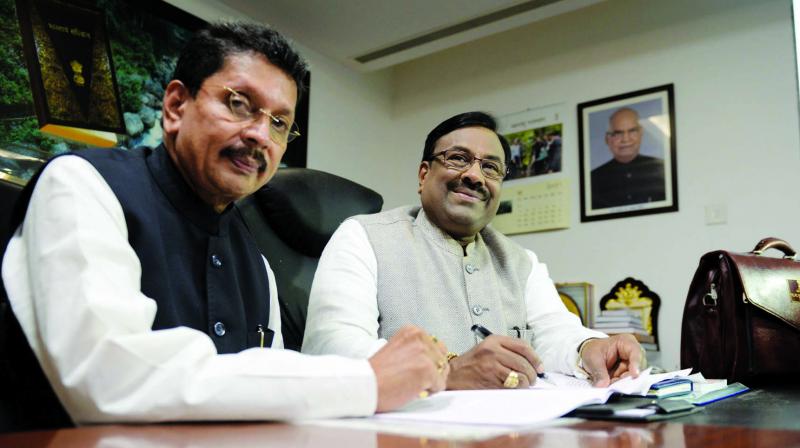 The budget made a special allocation of Rs 100 crore for skilling women and youth from minority communities. (Photo: File)

Mumbai: Devendra Fadnavis-led Maharashtra government presented its financial budget on Tuesday for 2019-20 which projected that state’s total debt will exceed Rs 4.72 lakh crore by March 20, forcing the government to spend whooping Rs 35,207 crore in 2019-20 on servicing this debt.

The government on Tuesday chalked out the expenditure plan of Rs 4.05 lakh crore with enhanced allocations for capital investments in the farm-intensive and rural infrastructure sector, The Indian Express reported.

The state’s 53 per cent population relies on agriculture and with elections due in October, the agro sector was the focal point of state finance minister Sudhir Mungatiwar’s budget speech in the legislative assembly.

“Through this Budget, the government reaffirms its commitment of standing firmly by farmers,” The Indian Express quoted him.

Hinting that the government that the government was planning to enhance the ambit of the farm loan waiver scheme, Mungantiwar said, “The government is going to take a decision shortly to give the benefit of this scheme to even those farmers who became ineligible due to technical reasons. There won’t be any shortage of funds.”

He further said that the benefits and concessions extended to drought-hit districts would also be made available to other districts too.

Allocations were made for the completion of irrigation projects, promoting micro-irrigation, and setting up value chains to sell agriculture produce.

The budget witnessed no introduction of tax. Politically, the budget attempted to make the right noises offering populist schemes for various disadvantaged sections and castes, including the Dhangar (shepherd) community and Other Backward Classes.

The budget made a special allocation of Rs 100 crore for skilling women and youth from minority communities.

The state’s struggling economy also reflected in Mungantiwar’s budget speech. 14th Finance Commission norms require states to maintain a revenue surplus position, Maharashtra has missed the target since 2012-13. In 2019-20, the revenue deficit is estimated to hit Rs 20,293 crore, making it the worst ever deficit in the state’s history in absolute terms. In 2018-19, the deficit gap was Rs 14,960 crore which was 0.56 per cent of the Gross State Domestic Product (GSDP).

The government’s fiscal policy has pointed a finger at some of the subsidies, concessions, and guarantees extended while discussing the widening deficit gap.

Though the government has surpassed its income target for 2017-18 as collections touched Rs 2.86 lakh crore by March-end, a corresponding rise in revenue expenditure has widened the deficit gap.

In the upcoming year, the government has forecast the revenue expenditure to further grow to Rs 3.35 lakh crore. For 2019-20, it has set aside Rs 43,667 crore for capital work, which is barely 10.29 per cent of the total spend estimates.

The fiscal deficit of the state government, in 2018-19 was Rs 56,053 crore against a budgeted target of Rs 50,586 crore. “An optimistic fiscal deficit target of 2.07% or Rs 61,670 crore has been set for 2019-20 assuming a normal monsoon and accelerated growth,” the fiscal statement states. Mungantiwar said that the fiscal deficit to the GSDP ratio was well within fiscal parameters.

“The share of non-tax revenue in total receipts is down from 8% to 5.34%. After the implementation of the Goods and Services Tax, there are limitations on increasing tax revenue. To increase non-tax revenue, a review committee is formed for the revision of existing fees and fines under all departments. It is also proposed to revise various taxes under the motor vehicle department, state excise, stamp duty, etc,” the finance department said.

Focussing on infrastructure, the government has pushed the construction and improvement of 10,000-km roads under Rs 30,000-crore hybrid annuity model.

Government has opted for off-budget borrowings for all big-ticket infrastructure projects—including the Mumbai Metro rail projects and the Mumbai-Nagpur Samruddhi Corridor — keeping them off the government’s balance sheet.