India   All India  19 Jun 2019  With encephalitis death toll at 112, this govt hospital in Bihar reeks of apathy
India, All India

With encephalitis death toll at 112, this govt hospital in Bihar reeks of apathy

The sight of Sri Krishna Medical College and Hospital, where over 300 encephalitis aflicted children were admitted, is dismal. 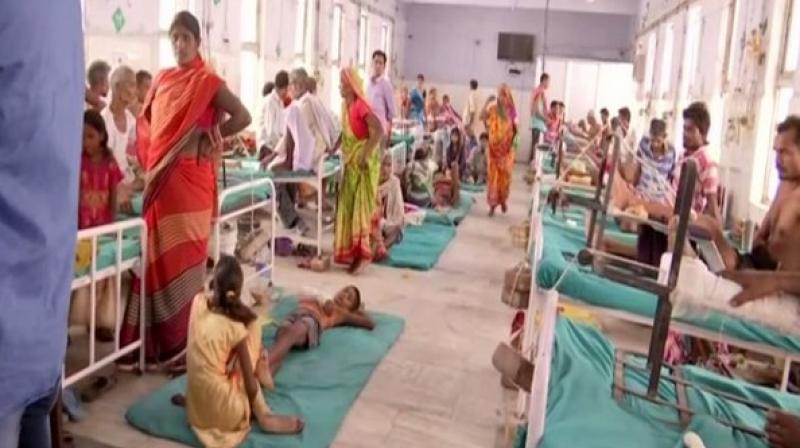 ‘Nobody pays heed to us and the doctor doesn't even come and check upon us. I was admitted here on June 5. Since then, the doctor had visited the patients twice or thrice,’ said another patient. (Photo: ANI)

Muzaffarpur: Despite encephalitis claiming lives of 112 children in Muzaffarpur, apathy seems to have plagued the administration as the state-run hospital here lacks basic infrastructure facilities and hygiene.

The sight of Sri Krishna Medical College and Hospital (SKMCH), where over 300 children ailing with encephalitis were admitted, is dismal, to say the least.

An insufficient number of beds, erratic electricity supply and dirt lurking in every corner - the condition is much worse when it comes to the Department of Pediatrics of the hospital.

The state of affairs is such that two or even more than two children are made to accommodate on one bed with attendants adjusting in whatever little space they can manage. Some are given mattresses to lie down on the floor.

Many in the hospital use handheld fans for relief owing to the simmering temperatures coupled with inadequate electricity supply.

"The condition has remained the same for a long time. There's no bed for the patients and we don't have any other place to go with our ailing children. It is not safe to stay like this in the summer along with many patients as the health of both bystander and the patient will deteriorate," an attendant accompanying a child said.

Some even alleged lack of staff and medical negligence.

"The doctor barely comes to visit us. My leg was wounded after I met with an accident and it has to be cleaned in alternate days, but it is not the condition here. They clean it only after 7-8 days," Ratan Singh, a patient, told ANI.

"Nobody pays heed to us and the doctor doesn't even come and check upon us. I was admitted here on June 5. Since then, the doctor had visited the patients twice or thrice," said another patient.

Sunil Kumar Shahi, Superintendent at SKMCH informed that out of the 372 children who have been admitted in the hospital, over 118 have been discharged and 57 will be discharged soon.

On Tuesday, Chief Minister Nitish Kumar had visited the hospital to take stock of the situation. Earlier, he had announced an ex gratia of Rs 4 lakh each to the families of the children who died due to encephalitis.

On Sunday, Union Health Minister Harsh Vardhan visited the facility and chaired a meeting over the issue with central and state representatives. He had to face public outrage as some people staged protests during his visit and some political workers also showed his convoy black flags.

Encephalitis is a viral disease which causes mild flu-like symptoms such as high fever, convulsions and headache.