India   All India  19 Jun 2020  Indian Army optimistic about normalcy returning to Kashmir after yet another encounter
India, All India

The number of suspected militants killed in Jammu and Kashmir this year has risen to 135. 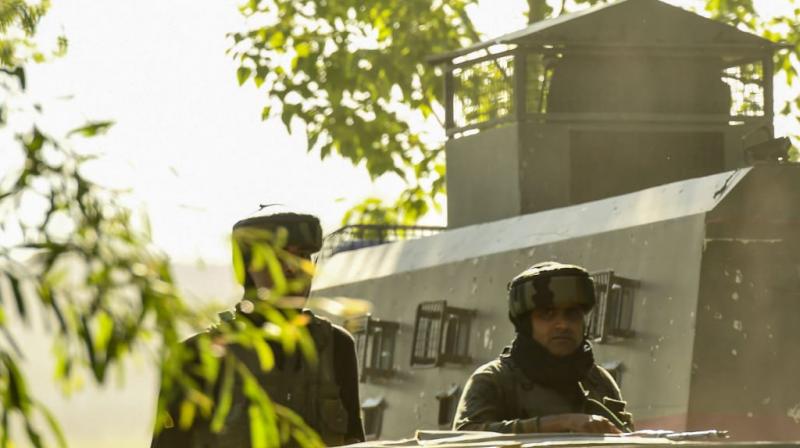 Scene from the encounter site. (PTI)

Srinagar: The Army on Friday claimed it sees a "palpable change" on the ground after each operation against separatist militants in Jammu and Kashmir and said the endeavour made together with the local police and other security forces to bring peace were revealing glaring feats.

"With every operation we are moving on the path of peace," Lt Gen Baggavalli
Somashekhar Raju, the commander of Srinagar-based 15 Corps, told reporters.
He said eight militants were killed in two encounters in south Kashmir’s twin districts of Shopian and Pulwama in the past 24 hours. Two among the slain had taken shelter at a mosque in Pulwama’s Pampore area and rejected appeals from security officials and the local imam to surrender, after which they were neutralised while exercising utmost restraint to protect the sanctity of the place of worship.

IGP (Kashmir Range) Vijay Kumar claimed no bullets were  fired or IEDs used in the operation against the militant duo holed up in the mosque. "There was no use of firing or IED. We fired tear smoke shells only to maintain the sanctity of the mosque," he said.

Endorsing him, Lt Gen Raju said, “The clash took place next to a mosque and extreme restraint was exercised by the security forces to ensure no damage is caused to the structure.”

A police officer who spoke to this newspaper on the condition of anonymity said that one militant was shot dead outside the mosque in Pampore’s Meej village while another injured in the shooting along with a third militant fled into the place of worship. “They too were eventually neutralised without any collateral damage. Perhaps one of them died due to blood loss and the other fell reportedly after hit in the head by a teargas canister.”

In the second gunfight in Shopian’s Bandhpawa Munand village, five militants were killed. A J&K police statement said the identities of the slain militants were still being ascertained. "The dead bodies have been sent to Baramulla for medico-legal formalities, including collection of DNA, followed by their last rites," it said.

With these, the number of suspected militants killed in Jammu and Kashmir this year has risen to 135, including 121 in hinterland and 14 along the Line of Control (LoC) and International Border with Pakistan. Most of fatalities have occurred in South Kashmir, comprising four districts of Shopian, Pulwama, Kulgam and Anantnag.

As per the official statistics, 29 security personnel have also been killed in face-offs in the hinterland, so far this year. Also twelve civilians died in these clashes or in militant attacks. Separately, ten security personnel and two civilian porters hired by the Indian Army, fourteen alleged militants and infiltrators and five civilians have lost their lives in gunfights or cross-border firing and shelling incidents along the LoC and IB.

Lt Gen Raju and DGP Dilbagh Singh said at the press conference that the security forces combating the three-decade-old insurgency will try to ensure normalcy is fully restored in next few months “so that people resume the activities of their choice in a peaceful manner”.