Tejaswi Yadav is an accused in the land-for-hotels case, allegedly involving the members of his father Lalu Prasad's family. 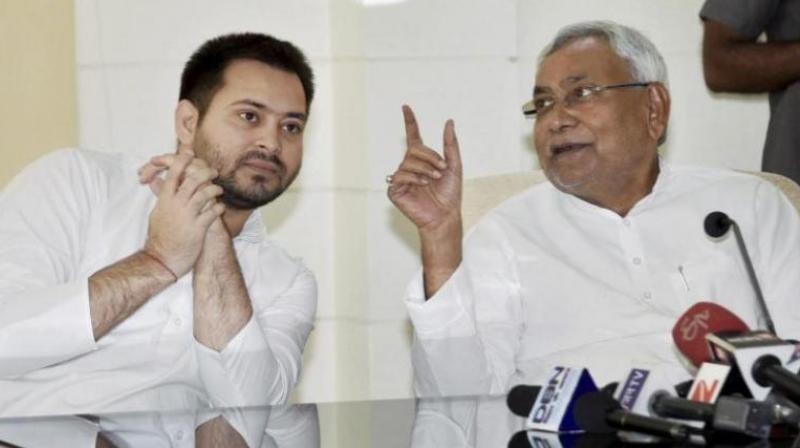 The meeting between the two leaders took place on Tuesday away from the media glare. (Photo: PTI/File)

Patna: The Janata Dal (United) JD (U) on Wednesday dubbed Tuesday's meeting between Chief Minister Nitish Kumar and his deputy Tejaswi Yadav as "routine," reiterating that the deputy chief minister should clear all accusations against him on the basis of facts in the public domain.

The JD(U) sought to dispel the notion that the impasse in the Grand Alliance government, cropping up after the lodging of an FIR by the CBI against Tejashwi Yadav allegedly for amassing huge wealth, has ended following the nearly 45-minute meeting between Nitish Kumar and Yadav after the cabinet meeting on Tuesday.

Tejaswi Yadav is an accused in the land-for-hotels case, allegedly involving the members of his father Lalu Prasad's family.

"It was a routine meeting of a cabinet colleague with the CM over some government matters and not a political one ... Our stand remains the same that those facing accusations should reply to them in the public domain," JD(U) spokesman Ajay Alok said, attaching no political significance to yesterday's meeting.

Another JD(U) spokesman Rajiv Ranjan Prasad termed the meeting as "normal" in connection with government work.

The RJD, however, rated high the meeting between Kumar and Yadav.

"There is no matbhed (difference in opinion) between us. Grand Alliance is strong," RJD leader and minister Vijay Prakash said.

His elder brother and RJD MP Jay Prakash Yadav claimed "Everything is fine."

Former RJD minister Shivanand Tiwari, who is in constant touch with RJD president Lalu Prasad, said "after the talks, the situation arising out of lack of dialogue has ended and the vehicle is now back on track."

The meeting between the two leaders took place on Tuesday away from the media glare. Mediapersons were barred entry into the secretariat, the venue of the Cabinet meeting, following a scuffle between Tejaswi Yadav and his minister Tej Pratap Yadav's securitymen and mediamen after the last one on Wednesday.

The press briefing by the Cabinet Coordination Department Secretary Brajesh Mehrotra too was shifted to the Public Relations Department office some distance away instead of the secretariat as in the past.

The BJP and NDA leaders appeared unimpressed over the meeting and attacked Nitish Kumar for not taking a call on Yadav.

JD(U) has sought "point-by-point" clarification from Tejashwi Yadav over the accusations against him. "A closed door meeting between the chief minister and deputy chief minister is not the proper answer to it," he said.

Former Chief Minister Jitan Ram Manjhi described the goings on in the Grand Alliance as "noora kushti" (friendly fight) to keep hanging to the power."