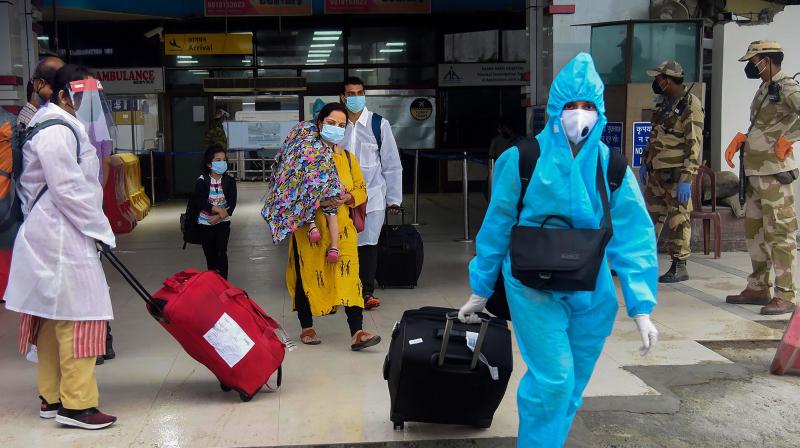 Wallets, electronic gadgets, pouches containing medicines, bags of used clothes, footwear, wristwatches and packets of food — all of these were items left behind in places which witness movement of large numbers of people could possibly have the deadly Coronavirus lingering all over them.

In the “touch me not” times, when the Covid-19 pandemic has changed the way people touch things, air travellers continue to be reckless with their belongings, often forgetting them at airports, which is giving a tough time to the airport authorities.

The airport authorities, who are working in tough conditions, are having to sanitise twice or sometimes thrice all the “lost and found” articles.

The newest addition to the things forgotten by flyers are thermometers and bags or pouches containing sanitisers and hand wash.

Information accessed by Deccan Chronicle shows that in the first week of flight services being resumed on May 25, passengers, who were nervous due to the pandemic, hardly forgot their belongings. Just two items were forgotten by an air passenger on the very first day — a pen drive and a bag containing used clothes.

Thereafter, except on May 28, when a passenger forgot his digital thermometer, not a single instance of forgetfulness on the part of the passengers surfaced till May 31.

Obviously, there were far less passengers in the first week, about 3,000 per day. By June, as the number of passengers increased slightly, forgetfulness beca-me evident. Along with dozens of items, wallets containing currency and credit/debit cards were also left behind. One passenger left behind a wallet containing a 50 paise coin.

“CISF personnel who come across these abandoned items sanitise them before handing them over to the lost and found department. There, they are sanitised a second time. We are also sanitising the lost and found counter regularly while the staff put on PPE kits and take all precautions. But passengers need to be responsible at least now,” an airport official said.

Come July and the trend continued as the number of air travellers increased to 12,000 to 13,000 per day. Before the pandemic, there were about 60,000 passengers daily at the Hyderabad airport.