At Bharatnagar in the Mahul area, 19 people died as a compound wall came crashing down on four to five houses located on a hillock at 1 am 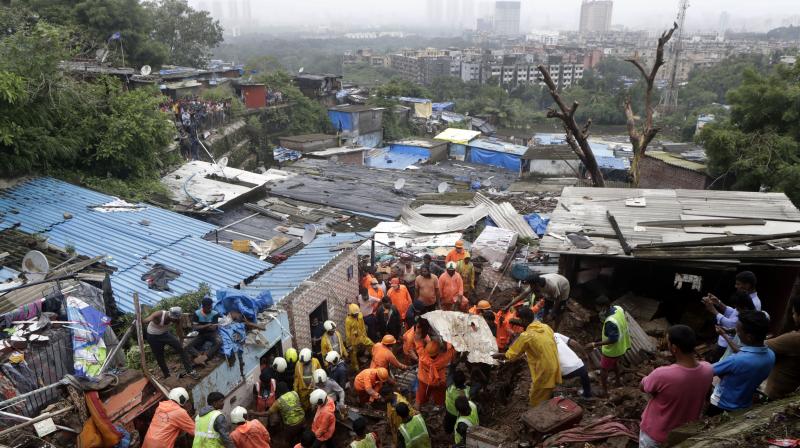 Mumbai: Torrential rains and thunderstorms caused havoc in Mumbai on Sunday as 31 people were killed in rain-related incidents like wall collapses and landslides in different parts of the city. The water supply to the city was also severely affected due to flooding at the city’s key water purification complex. The weather department has predicted further heavy rainfall in the city for the next 24 hours.

Incessant rains lashed Mumbai city and its suburbs for several hours late Saturday night and Sunday morning, resulting in severe waterlogging at several places. Suburban train services were suspended, whereas several routes of BEST (city transport) buses were diverted. However, a majority of Mumbaikars were spared from inconvenience as it was a Sunday.

At Bharatnagar in the Mahul area, 19 people died as a compound wall came crashing down on four to five houses located on a hillock at 1 am. Ten slumdwellers died as six shanties collapsed after a landslide in Vikhroli at 2.30 am. A 16-year-old boy died after a forest department compound wall collapsed in Bhandup, while at Andheri, a 26-year-old man died due to electrocution in his shop.

The Indian Meteorological Department (IMD) said the suburban parts of Mumbai received 235 mm of rainfall in 24 hours, while the city received 197 mm rainfall. A red alert was issued for Mumbai on Sunday with the forecast of “heavy to very heavy rainfall with extremely heavy rainfall at isolated locations”. Images from a doppler radar showed that the thunderstorm had a cloud top height of nearly 18 km (around 60,000 feet), the IMD said.

The rains also affected water supply in most parts of the city as the water purification complex at Bhandup saw heavy flooding. The electrical gear that controls the pumping and filtration processes at the complex was inundated with water, leading to technical problems. As a precautionary measure, the power supply of the complex was also discontinued. The Brihanumbai Municipal Corporation (BMC) has appealed citizens to boil water before drinking.

Maharashtra chief minister Uddhav Thackeray expressed grief over the loss of lives in incidents at Chembur and Vikhroli due to torrential rains and announced an ex-gratia payment of Rs 5 lakhs for the kin of each of the victims. The injured would be provided free treatment, he said.

Relief and rehabilitation minister Vijay Wadettiwar said 350 mm rainfall was recorded from Saturday night to Sunday morning. People were taken to safer places in the city after a red alert was announced.

Prime Minister Narendra Modi also expressed anguish at the loss of lives caused by wall collapse incidents in Mumbai. His office announced Rs 2 lakhs each for the next of kin of the deceased from the Prime Minister’s National Relief Fund. A sum of Rs 50,000 would be given to the injured.

“Saddened by the loss of lives due to wall collapses in Chembur and Vikhroli in Mumbai. In this hour of grief, my thoughts are with the bereaved families. Praying that those who are injured have a speedy recovery,” Mr Modi said.