All political parties talk about welfare of Kashmiri Pandits because they form an important vote bank. 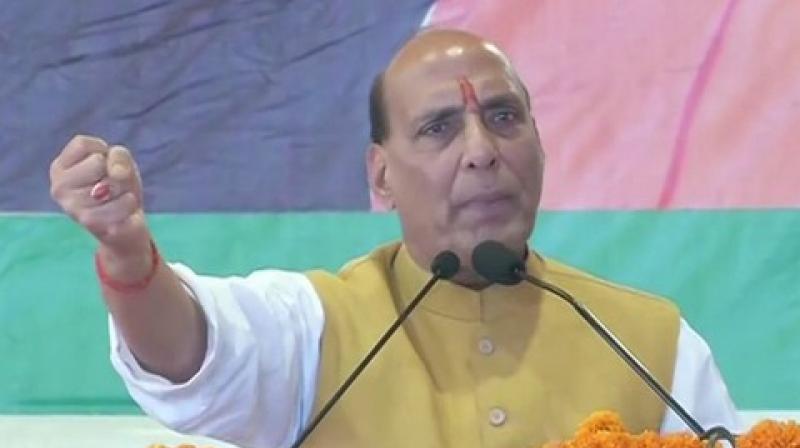 On a day defence minister Rajnath Singh asserted that talks with Pakistan will now be only on PoK, it did not bring much cheer among the 13 lakh displaced people of whom 10 lakh reside in J&K while the remaining three lakh are spread across New Delhi, Punjab, Uttar Pradesh, West Bengal among other states, as they feel that mere lip service is not helping. (Photo: ANI)

Srinagar: The wounds of losing their loved ones and leaving behind their properties in the lanes and bylanes of Mirpur, Bhimber, Kotli and other areas which now fall in the Pakistan Occupied Kashmir (PoK) are still fresh.

Tales of their great escape and how they cheated death from the brutal Pashtun tribal militias of Pakistan and other Pakistani irregular forces who were raping women, butchering men and children and burning down their houses is well known all over J&K. To many who witnessed the death and destruction on those dark days of 1947, the memories still send shivers down the spine and most of them are still alive to tell the gory tales.

But for the last 70 years, successive governments, both at the state and the Centre, have only given them assurances — sometimes of taking back PoK from Pakistan or doing everything possible for them — which never translated into action. Therefore, when the whole country was celebrating scrapping of Article 370 and bifurcation of Jammu and Kashmir into two Union Territories, the residents of what used to be Maharaja Hari Singh’s Jammu and Kashmir (pre 1947), had nothing to cheer about.

On a day defence minister Rajnath Singh asserted that talks with Pakistan will now be only on PoK, it did not bring much cheer among the 13 lakh displaced people of whom 10 lakh reside in J&K while the remaining three lakh are spread across New Delhi, Punjab, Uttar Pradesh, West Bengal among other states, as they feel that mere lip service is not helping.

“‘For the last 70 years, we have been begging before the state and Central governments to give us the status of either refugees or internally displaced persons as the PoK has always been an integral part of India. Due to the neglect of successive governments, nearly 80 per cent of the displaced people of PoK are living in pathetic conditions, doing petty jobs like scavenging or working as daily labourers. This is because no government came forward to help them,” says Rajiv Chuni, chairman of SOS International, an organisation of displaced people from PoK.

A prominent face in the community, Mr Chuni, who is based in Jammu, told this newspaper that it is high time that the Centre decides to hold elections to at least eight of the 24 seats that lie vacant ever since Pakistani forces and irregulars took control of a part of Jammu and Kashmir after the first Kashmir war in 1947-48. Even till date, out of 111 seats of the J&K Assem-bly, elections are held to only 87 seats and 24 segments which fall in PoK are left vacant.

“Our contention is that we are 13 lakh from different parts of PoK. At least one-third of the 24 seats (eight seats) be opened and reserved for us and fill those seats with PoK representatives. This will politically empower the community which has no representation either in the Assembly or Parlia-ment. I even approached the Election Commission last year and met CEC O.P. Rawat who wrote to the Centre and state on this issue. But so far nothing positive has happened,’’ says Mr Chuni.

All political parties talk about welfare of Kashmiri Pandits because they form an important vote bank. “We also vote but what is the point when we are not treated on par with other citizens and seen like foreigners? Like all other Indians, we too are part of the country. All we are asking for is to recognise us as internally displaced persons or refugees and extend benefits to our people, a majority of whom are below the poverty line and living in pathetic conditions.”

He says that scrapping of Article 370 for J&K meant nothing to them as neither did they benefit from it nor did they lose anything. “We were hoping that there would be some announcement made for the displaced persons from PoK when home minister Amit Shah made the announcement. Though it is good that some discussion is going on (PoK being integral part of India), nothing concrete is happening,’’ he says.

Unlike the Kashmiri Pandits who get several benefits from the state and the Centre like reservations in educational institutions and other financial benefits, the displaced persons of PoK get no such benefits. “The Centre does not want to recognise us as refugees nor as internally displaced persons. Over the last 70 years, it feels as if we are misplaced persons. We are the residents of Maharaja Hari Singh’s Jammu and Kashmir (before 1947) and we were state subjects. After accession of J&K to India, we automatically become the subjects of India,’’ he says.

The 13 lakh people originally belong to Muzaffarabad, Mirpur, Kotli, Bhimber and other areas which now fall in PoK and all of them to flee leaving behind their properties in 1947. Mr Chuni and his ancestors belong to Mirpur in PoK and he says the administration there has constructed the Mangala dam by demolishing several houses, one of which belonged to his family.

He says that though India is a member of the UN, it is not a signatory of Refugee Law. ‘’Neither has a law been made by the centre for people like us. So where should we go? Why this disparity ?’’ he wonders.

What is adding to the misery of the displaced persons is the oft-repeated line by successive governments that they would re-integrate PoK with J&K. “If that is done, we are more than happy to go back to our areas. But till that happens, we are neither here nor there,” says Mr Chuni, who accuses Kashmir-centric political parties like the National Conference and te PDP of opposing their demand (of holding elections to the 24 seats) as they do not want to change the balance of power in the sate which is tilted towards Kashmir region as it has more seats than Jammu region.

The Pakistan government has often said that it was ready to compensate for the properties of all those who had to flee PoK but the Indian government would not accept it as it feels that Pakistani supremacy would be established if it accepts the proposal of compensation.