We don’t try to influence BJP, only give advice if it’s sought: RSS chief

‘Hindu rashtra doesn’t mean no place for Muslims... If it becomes so, it won’t be Hindutva’ 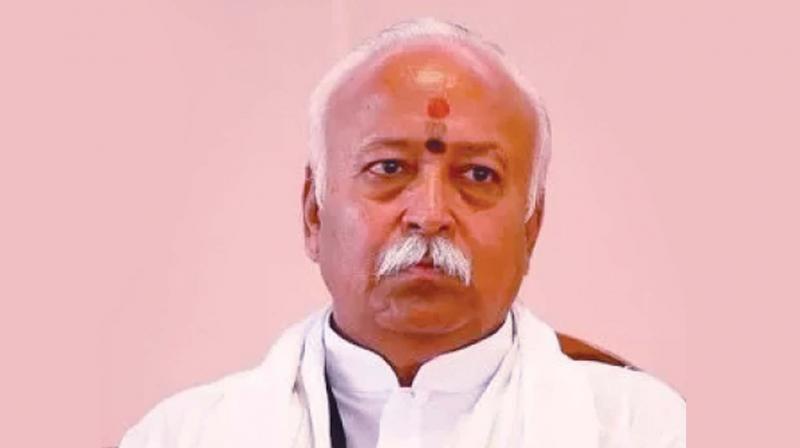 New Delhi: Describing the word “Hindu” as a universal truth and a message that respects diversity and maintains a balance between divergent views, RSS supremo Mohan Bhagwat asserted on Tuesady that a “Hindu Rashtra” doesn’t mean there is no place for Muslims as if such a day comes, “there will be no Hindutva”.

In his second-day discourse in the lecture series on the “Future of Bharat: An RSS perspective”, Mr Bhagwat spoke on “Hindu” and “Hindutva” and its real meaning, and also countered allegations that the RSS interferes in governance or in the functioning of the BJP. Mr Bhagwat declared the RSS never asks it volunteers to work for any particular political party and that it does not seek to influence or give advice,  but gives suggestions if this was sought, without directly naming the ruling BJP or the Narendra Modi government.

The RSS supremo also countered allegations that the Sangh was trying to distort the Constitution by asserting that it is the duty of every citizen to respect and follow the Constitution.  Mr Bhagwat even quoted from its preamble “... and to promote among them all fraternity, assuring the dignity of the individual and the unity and integrity of the nation”, to assert that one of the main tasks of the Sangh was to preserve and promote this very “bandhubhaav” (fraternity).

“Hindu Rashtra does not mean that there is no place for Muslims. The day it becomes so, it will not be Hindutva as Hindutva talks about Vasudhaiva Kutum-bakam”, the RSS supremo asserted. The Sangh and its affiliates have often come under attack by the Opposition for being “anti-minorities”. Mr Bhagwat said the Sangh’s work towards universal brotherhood and India promotes this by accepting unity in diversity, which is “Hindutva”. He said “Hindutva” alone gives the philosophical foundation for fraternity as it teaches “sarveshamvirodhen”, or enemity to none. At the beginning of his dicourse, Mr Bhagwat clarified that the RSS has no interest in “rajniti” (politics), but in “rashtraniti” (national policy), and the Sangh steers clear of “votes” and elections. Withouth directly naming the BJP or the Narendra Modi government, Mr Bhagwat, countering allegations, said that the Sangh had nothing to do with their functioning.

“Sangh volunteers only work towards nation building... Sangh affiliates are independent, sovereign and self-reliant... The Sangh do not take decisions for its affiliates ... we support each other through consultation if it is required and help each other ... we do not ask our volunteers to work for any one political party... whoever is working towards nation-building ... we stand behind them... no outfit has any authority over the nation’s interest,” said Mr Bhagwat. The RSS has often faced flak for interfering in the functioning of the Narendra Modi government and also decision-making of the ruling party, the BJP, a Sangh Parivar affiliate.

Admitting that Prime Minister Narendra Modi and President Ram Nath Kovind were associated with the Sangh, Mr Bhagwat said the RSS has no influence on the government’s policy decisions or politics. “People think that calls come from Nagpur (the RSS headquarters) but it has never happened. We (RSS) have nothing to do with their political or policy decisions. The Constitution of the country has envisaged guidelines on how the government will function, and what will be the power centre, and there cannot be any other power centre,” the RSS chief declared.

Mr Bhagwat said it was often asked why so many of the Sangh’s swayamsewaks were in one party, but that was not the Sangh’s concern. The question of “why they do not wish to be associated with other parties is for them to consider”, he said, as the Sangh never asks its swayamsewaks to work for a particular political party.

Explaining the words “Hindu” and “Hindutva”, Mr Bhagwat said one should look at them not through the propaganda and perception created about them, in an apparent reference to the Opposition parties who often accuse the RSS and BJP of promoting “their version of Hindutva”.

Mr Bhagwat said the word “Hindu” denotes respect for diversity and “Hindutva” cannot be defined by the way one eats or a particular language or region as there cannot be categories.

“No particular language or God bind us together. Our food habits, rituals and customs are not the same. We are divided in various states, languages and castes. In spite of this, we claim to be the progeny of Bharat Mata and the followers of universal human values, which is Hindutva,” asserted the RSS chief. He also said that on the very basis of the set of values that have guided the nation since time immorial, and have been followed, “dharma” developed, not confined to any geography or any language but was universal. Mr Bhagwat said that Dr B.R. Ambedkar, in one of his speeches in the Constituent Assembly, had talked about universal brotherhood and emphasised on promoting fraternity among countrymen. He said Dr Ambedkar also talked about ensuring the dignity of individuals and the integrity of the nation and had suggested that religion was not a code but a set of values, and Hindutva was based on that set of values.

“While speaking in Parliament about the Hindu Code Bill, Dr Ambedkar had asked what is a religion? A value or a code?  He then said that if you consider a code as a religion, then a code may change but not values. Our perspective towards religion is that it is based on values,” said Mr Bhagwat.