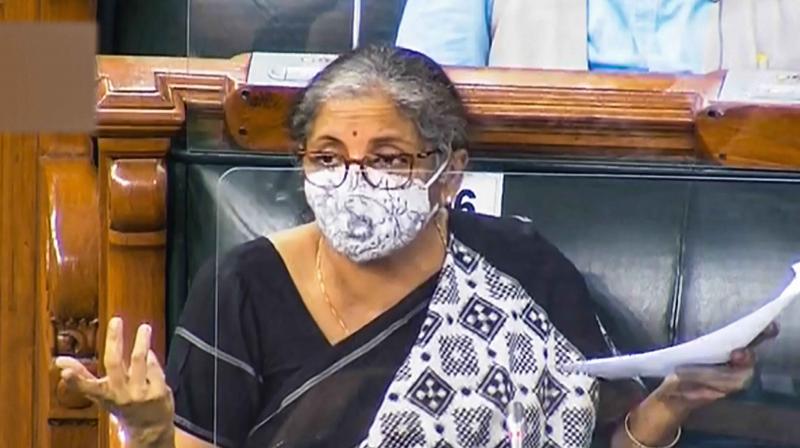 New Delhi: Rajya Sabha on Saturday passed amendments to the insolvency law for suspension of fresh insolvency proceedings for at least six months starting March 25 amid the coronavirus pandemic, with Finance Minister Nirmala Sitharaman saying a decision on extending the suspension of relevant provisions will be taken next week.

In the wake of the COVID-19 situation, the government decided to suspend the provisions starting from March 25 for six months by promulgating an ordinance in June.

Default on repayments from March 25, the day when the nationwide lockdown began to curb coronavirus infections, would not be considered for initiating insolvency proceedings for at least six months.

The six-month period is ending next week.

The Insolvency and Bankruptcy Code (Second Amendment) Bill, 2020, seeks to replace the ordinance issued in June, was passed by a voice vote after a brief discussion.

Replying to the debate, Finance and Corporate Affairs Minister Nirmala Sitharaman said the suspension of provisions will end next week.

"At the moment, amendment to the Code gives me a provision to only extend till one year. If at all, because it is coming to an end on September 25 this year, September 24 itself we have to make an announcement about what is going to happen. But even if I do, it means by March it should be ending...," the minister said.

The minister also clarified that insolvency proceedings against corporates defaulting on loans prior to March 25 will continue and the amendment will not stall those cases.

A majority of the opposition parties also supported the bill but urged the government to provide interest waiver on loans to farmers and poor people suffering due to the COVID-19 crisis.

During the debate on the bill, many members expressed fears over its possible misuse by corporates even as they hoped that it will help in reviving the economy.

On members' queries regarding liability of personal guarantors in the IBC, Sitharaman said the corporate debtor often has guarantors.

"So, for comprehensive corporate insolvency resolution and liquidation we felt it was necessary that the insolvency of the corporate debtor as well as its guarantors are considered together to whatever extent it is possible," Sitharaman said.

On queries about the urgency to bring the ordinance in the first place, Sitharaman said that "between sessions if there is a need for ordinance because the ground situation demands it, I would think a responsive government's duty is to at least use the ordinance to show that we are there with the people of India."

"So to that extent, I am sure the House will appreciate that as and when the government decides for ordinance it is because of that, and whenever the next session happens we come back," she said.

Because of the COVID-19 pandemic, the minister said, businesses faced trouble.

So it was decided "that it was better to suspend Sections 7, 9 and 10 of IBC so that we can prevent corporate persons, which are experiencing distress on account of the unprecedented situation, being pushed into insolvency proceedings".

The minister further said the IBC is a critical part of business now, and cited data to show how the code had performed.

Citing data for NPAs of commercial banks during 2018-19, she informed the House that Lok Adalats recovered 5.3 per cent, Debt Recovery Tribunals (DRTs) recovered 3.5 per cent and SARFAESI recovered 14.5 per cent.

On the other hand, IBC ensured 42.5 per cent of recovery.

Sitharaman further said that most of the resolutions are happening to make the company to be a going concern only.

"Priority is to keep the company to be a going concern rather than to liquidate them at the earliest," she said adding that 258 companies were saved from going bankrupt through the IBC process, while 965 firms went for liquidation.

"... 258 companies were rescued which means employment is back again with them. Companies which have been liquidated in total, three-fourths of them were defunct and were also given liquidation solution and therefore at least loss of employment was reduced," she said.

So in value terms, the assets rescued were about two and a half times of the assets which went into liquidation, Sitharaman said.

The IBC, which came into force in December 2016, has been amended five times.

The amendment provides for suspension of Sections 7, 9 and 10 of the IBC for at least six months and extendable up to one year from March 25, 2020. In this regard, a new section '10 A' has been inserted in the IBC.

Participating in a debate, KK Ragesh (CPI-M) said it has been told in the House that the amendments has been brought to save businesses and corporates.

"Why the same logic is not applied in the case of farmers? Farmers are also bankrupt. Why the government is not taking any responsibility and any initiative in waiving the farmers' loans?" he asked.