India   All India  19 Oct 2017  Ayodhya is my personal belief, it's my duty to develop temple town: Yogi
India, All India

Ayodhya is my personal belief, it's my duty to develop temple town: Yogi

'I am trying to bring the Ayodhya town on the world tourist map by ensuring all-round development,' the chief minister said. 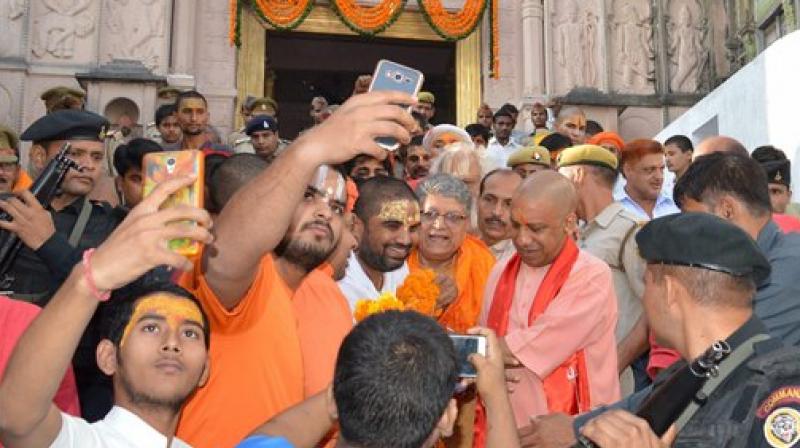 Ayodhya (UP): Uttar Pradesh Chief Minister Yogi Adityanath on Thursday visited the disputed Ram Janmabhumi site, a day after the mega pre-Diwali celebrations organised by his government in this temple town.

Speaking to reporters after the visit, Adityanath said that Ayodhya was his personal belief and opposition parties had no right to question him on it.

On the second day of his visit here, Adityanath after having stayed for the night at the Faizabad circuit house, offered prayers at the Hanumangarhi temple before going to the
Ram Janmabhumi site.

Later, speaking to mediapersons, the priest-turned- politician said "Ayodhya is my personal belief and it is my duty to develop Ayodhya".

Referring to opposition parties, he said they had no right to raise questions on it (his personal belief).

"I have given instructions for complete cleanliness and hygiene for the temple town," he added.

"By celebrating a grand Diwali in Ayodhya, I have not started a new practice but it is an age old tradition here to celebrate the home coming of Lord Rama," he said.

It is an effort by me to protect and promote our age old culture, he added.

"I am trying to bring the Ayodhya town on the world tourist map by ensuring all-round development," the chief minister said.

After visiting Hanumangharhi and Ram Janmabhumi site, Adityanath went to Digambar Akhara where he had breakfast with about a dozen 'Mahants'. He also visited the Sugreev Qila temple to meet its ailing priest Purushottamacharya.