India   All India  19 Oct 2018  My life is in danger: Women activist, after being turned back from Sabarimala
India, All India

My life is in danger: Women activist, after being turned back from Sabarimala

Rehana Fatima's house in Kochi was vandalised by unidentified miscreants on Friday morning. 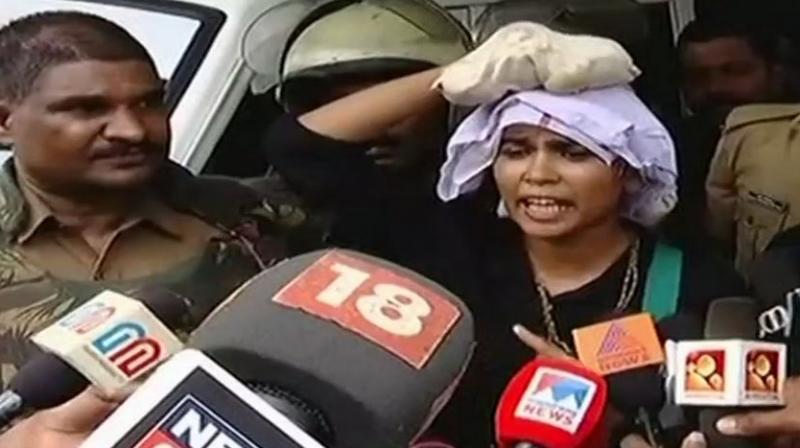 'Police have said that they will provide protection. That is why I am going back,' Rehana Fatima told the media. (Photo: Twitter | ANI)

Kochi: Activist and devotee Rehana Fatima who is one of the two under-50 women who tried and failed to enter Sabarimala shrine on Friday after being stopped meters from the holy steps to the shrine said, “My life is also in danger”.

When Rehana along with Hyderabad based journalist Kavitha Jakkal was trekking to the shrine on Friday morning, her house in Kochi was vandalised by unidentified miscreants.

“I don't know what happened to my children. My life is also in danger. But they (police) have said that they will provide protection. That is why I am going back,” Rehana Fatima told the media.

Forced to return meters away from the renowned Lord Ayyappa shrine in Kerala, Fatima said, “People, not the devotees, who want to disrupt peace didn't allow us to enter (the Sabarimala temple). I want to know what was the reason. Tell me, in which way one needs to be a devotee. You tell me that first and then I will tell you if I'm a devotee or not.”

Rehana Fatima and Kavitha Jakkal had to stop 500 metres away from the shrine after the head priest told the police that if the women enter the temple, he will close the gates and stop puja.

The Sabarimala temple opened its doors for women for the first time on Wednesday after the historic verdict of the Supreme Court on September 28 that lifted the centuries-old ban that prohibited women of menstruating age (10 to 50 years) from entering the shrine.