India   All India  19 Oct 2019  No protests in Jammu and Kashmir till all restrictions lifted: police chief
India, All India

No protests in Jammu and Kashmir till all restrictions lifted: police chief

On Tuesday, half a dozen women activists including the sister and daughter of Farooq Abdullah were arrested during a protest. 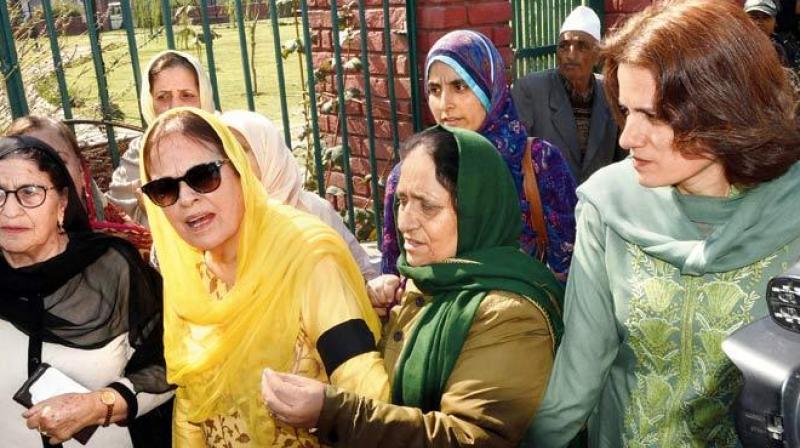 On Tuesday, half a dozen women activists including the sister and daughter of former chief minister Farooq Abdullah were arrested during a protest against abrogation of provisions of Article 370. (Photo: AFP)

Srinagar: The Jammu and Kashmir police has banned all forms of protests in the Valley until the government lifts restrictions and restores normalcy.

On Tuesday, half a dozen women activists including the sister and daughter of former chief minister Farooq Abdullah were arrested during a protest against abrogation of provisions of Article 370 and bifurcation of Jammu and Kashmir into two union territories.

"Our effort would be to stabilise peace further before any such activity is allowed," Jammu and Kashmir police chief Dilbagh Singh told NDTV.

He raised objections over the content written on some of the placards carried by women. He said that it was not 'very good' and that they held the potential to dismiss the law and order situation in the Valley, and therefore, ''effective action had to be taken''.

Abdullah's sister Suraiya and his daughter Safiya, who were leading a group of women activists, were detained by the police. Wearing black arm bands and holding placards, the women protestors were not allowed by the police personnel to assemble and were asked to disperse peacefully.

However, the protestors refused to disperse and tried to stage a sit-in.

Singh urged Kashmiris to respect the restrictions placed in Srinagar. He also said women protesters need to go to the deputy commission and seek permission.

"Absolutely no protests will be allowed. Maybe when the situation further improves, we will see. But not as of now," Singh said.

The 81-year-old patron of the National Conference and former Jammu and Kashmir chief minister Farooq Abdullah has been detained under the stringent Public Safety Act (PSA), which enables authorities to detain any individual for two years without trial.