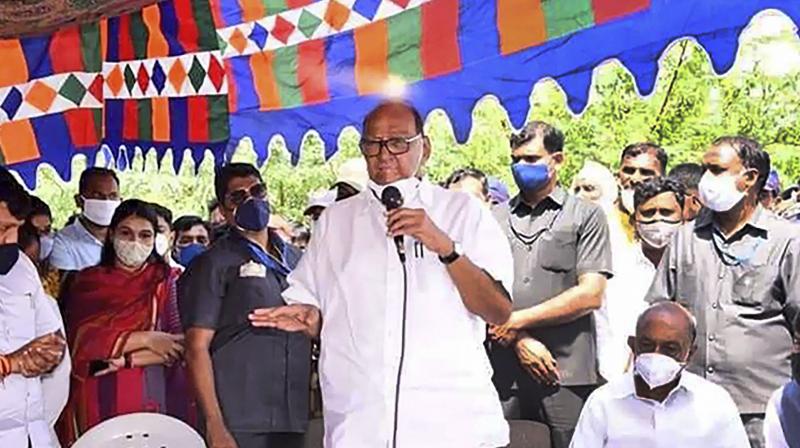 NCP President Sharad Pawar interacts with farmers during a visit to a village to inspect damaged crops, at Tuljapur in Osmanabad district, Sunday, Oct. 18, 2020. (PTI)

Mumbai: Nationalist Congress Party (NCP) chief and former Union agriculture minister Sharad Pawar on Sunday said that he would meet Prime Minister Narendra Modi to demand financial assistance for crop losses of farmers due to heavy rains. Pawar is on tour of Osmanabad district, which has experienced crop damages due to heavy rain. Meanwhile, the farmers in Nanded district have stopped the convoy of the relief and rehabilitation minister Vijay Wadettiwar and demanded from him to declare 'wet famine'. Wadettiwar was on tour of Nanded district to take stock of the crop damages. He said that once the survey reports come, the government will provide immediate assistance.

Terming the crop damages due to unseasonal heavy rain “unprecedented”, Pawar assured expeditious financial help to the affected farmers. Addressing a meeting of farmers in Tuljapur-Paranda area of Osmanabad district in Marathwada, the former Union agriculture minister assured them that he would discuss the issue of financial relief with Chief Minister Uddhav Thackeray and also seek assistance from the Centre.

“This is unprecedented. The land has been destroyed in such a way that crops cannot be sown again for a couple of years. Standing crops have been destroyed and the land has been damaged. Everything needs to be rectified. The state government cannot do it alone. We will speak to the Prime Minister as well regarding a long-term package and immediate assistance from the Centre,” Pawar said.

Heavy rains and floods claimed at least 48 lives in Maharashtra's Pune, Konkan and Aurangabad divisions while crops on lakhs of hectares were damaged extensively due to heavy rains in the last few days, officials said on Friday.

Farmers suffering crop losses due to heavy rains stopped the convoy of Maharashtra minister Vijay Wadettiwar in Nanded district and demanded that instead of survey tours, the government provide them immediate help.

MWadettiwar later said, “As soon as the survey reports are received by the government, help will be commenced immediately.” He also said that the state government would also seek aid for farmers from the Centre.