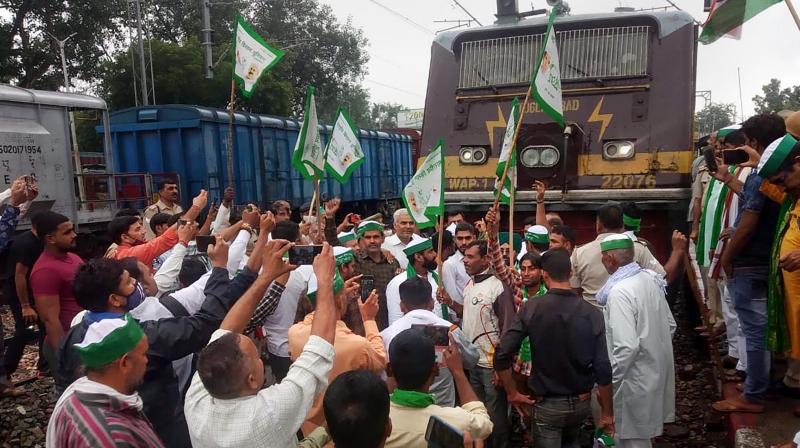 New Delhi: Nearly 300 trains were affected, mostly in North India, as the farmers squatted on railway tracks as part of the Samyukt Kisan Morcha’s six-hour “rail roko” agitation demanding the dismissal and arrest of Union minister of state for home Ajay Mishra, whose son is in custody for his alleged role in the Lakhimpur Kheri violence. The protests had a major impact on train services at about 150 locations in Punjab, Haryana, Uttar Pradesh and Rajasthan, where passengers had to wait for hours with their baggage.

Bharatiya Kisan Union leader Rakesh Tikait said the farmers will soon intensify their agitation if action was not taken against the minister. “We will soon announce a programme for our future strategy,” he added.

The “rail roko” protest on Monday not only had its impact in North India but also affected train services in several other states. In Odisha, farmers protested for about 20 minutes at most stations, barring Gorakhnath, where they sat on the tracks for around an hour. Over a dozen trains came to a halt at various stations in the state, causing problems for daily commuters, as the agitators refused to vacate the tracks. The trains were allowed to move only after the protesters left the stations.

In Madhya Pradesh, the police had to disperse farmers who squatted on the rail tracks near Bamnia railway station in Jhabua district. Holding the tricolour and raising slogans of “Bharat Mata ki Jai” and “Jai Kisan”, the protesters made several attempts to stop trains on the busy Delhi-Mumbai route.

In the North Western Railway (NWR) zone, rail traffic was affected in some sections in Rajasthan and Haryana with 18 trains cancelled, 10 partially cancelled and one diverted due to the protest.

In UP’s Muzaffarnagar, Bharatiya Kisan Union workers halted Amritsar-Delhi and Jalandhar Express trains by staging a dharna on the tracks. Trains were also halted at Meerut and Greater Noida’s Dankaur stations by the protesters, BKU media in-charge Dharmendra Malik said. In Ghaziabad’s Modinagar, the farmers staged a demonstration in front of a goods train which had already reached its destination.

Farmers sat on rail the tracks in several sections, including Ferozepur-Fazilka section in Ferozepur city and the Ferozepur-Ludhiana section at Ajitwal in Moga.

In Rajasthan, farmers protested on the tracks in Hanumangarh district and raised slogans against the Central and UP governments. In the state capital, farmers held a protest at the entrance of Jaipur Junction station.

SKM’s state joint secretary Sanjay Madhav said: “We have not been allowed to enter Jaipur Junction, so we have started the dharna at the entrance.”

The trains that were affected in the Northern Railway zone included the Chandigarh-Ferozepur Express. Its scheduled departure from Ludhiana was 7 am, but it was stranded there due to a blockade in the Ferozpur-Ludhiana section. The New Delhi-Amritsar Shatabdi Express was halted near Shambu station due to blockades near Sahnewal and Rajpura. “About 25 passenger and short-distance trains were cancelled,” a senior railway officer said.

At Ludhiana railway station -- one of the busiest in Punjab -- a person headed for Jodhpur rued that he came to know about the protest after reaching the station. He appealed to farmer leaders to lay siege to the residences of politicians rather than harassing the common man. “They should think about the public”, he said.

A man waiting for his train at Ludhiana station with his family said they have to rush for Gonda in UP as one of their relatives has died.

At Patiala station, Dinesh Joshi searched frantically for milk and hot water for his child as the train he was travelling in had stopped due to the farmers’ protest.

A group of protests put up a banner with “Jai Jawan Jai Kisan” written on it in front of a train forced to stop at Moga. They also carried photos of the four farmers killed in the Lakhimpur Kheri violence.

Four of the eight people who died in the violence on October 3 were farmers, allegedly knocked down by a vehicle carrying BJP workers. Angry farmers then allegedly lynched some people in the vehicles. The other dead included two BJP workers and their driver.

Farmers have claimed that Ashish Mishra was in one of the vehicles, an allegation denied outright by the minister who claimed his son was at another event when the violence broke out in Lakhimpur Kheri.