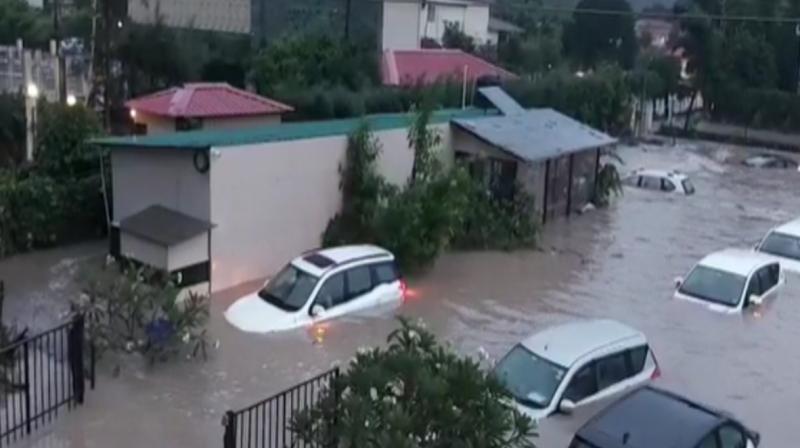 Eleven deaths in rain related-incidents were reported on Tuesday, while many people are feared trapped in rubble following cloudbursts and landslides. (Image credit: Twitter/@weatherindia)

Dehradun/Nainital: Eleven more deaths were reported in Uttarakhand on Tuesday as incessant rains continued to lash various parts of the state, especially Kumaon region, razing houses to the ground and leaving many trapped in the debris.

Nainital was cut off from the rest of the state with three roads leading to the popular tourist spot blocked due to a series of landslides.

Eleven deaths in rain related-incidents were reported on Tuesday, while many people are feared trapped in rubble following cloudbursts and landslides, Chief Minister Pushkar Singh Dhami told reporters in Dehradun.

This takes the toll in rain-related incidents across Uttarakhand to 16, with five deaths reported on Monday, he said.

Dhami assured that three Army helicopters will soon arrive to assist in relief and rescue operations underway in the state.

Two of these helicopters will be sent to Nainital and one to the Garhwal region to rescue people stranded at different points, he said.

The CM, however, asked people not to panic, saying all necessary steps are being taken to evacuate them to safety.

He also reiterated his appeal to Chardham yatris to stay where they are and not to resume their journeys before the weather improved.

The damage caused by the rains is being assessed, Dhami noted, admitting that farmers had been hit hard by the incessant showers.

He also said that Prime Minister Narendra Modi had spoken to him on the phone to take stock of the situation and assured him of all necessary help.

The Mall Road in Nainital and Naina Devi temple located along the banks of Naini lake have been flooded, while a hostel building has been damaged due to landslides.

The district administration is trying its best to help tourists stranded in the town, the police has been deployed to warn incoming and outgoing traffic, asking them to stay put until the wet spell is over, a report from Nainital said.

Landslides have blocked the exits in the town. Around 100 people got stuck at Lemon Tree resort on Ramnagar-Ranikhet route, with water from swollen Kosi river entering the resort.