The Opposition MPs termed the National Conference chief’s detention as illegal and demanded that he be allowed to attend the House. 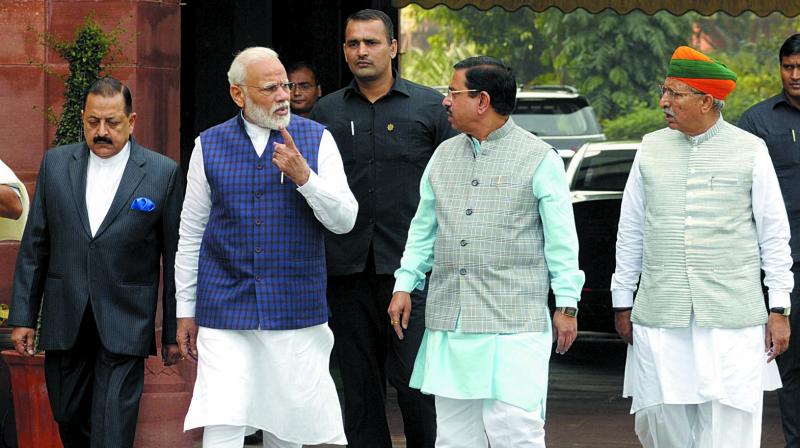 New Delhi: The Winter Session of Parliament began on Monday on a stormy note as a united Opposition targeted the government by raising the absence of former Jammu and Kashmir chief minister Farooq Abdullah, a Lok Sabha MP, from the Lower House, and later walked out of the House over the issue.

Dr Abdullah’s could not attend the House as he has been in preventive custody under J&K’s Public Safety Act at his Srinagar residence after Article 370 was revoked by the Centre in August. The issue was raised on Monday by Trinamul Congress MP Saugata Roy as the members began settling into their seats.

“Sir ... Dr Farooq Abdullah yahan par nahi hain (Sir, Dr Farooq Abdullah is not here),” Mr Roy said immediately after the House assembled for the day. As Question Hour continued amid angry protests by the Opposition MPs (with many Congress members trooping into the well) and even Shiv Sena leaders protesting, in the Zero Hour Congress’ Lok Sabha leader Adhir Ranjan Chowdhury launched a blistering attack on the government for barring MPs from visiting J&K while allowing members of the European Parliament to visit Srinagar.

“Our leader Rahul Gandhi was not allowed to visit (J&K), several MPs were sent back... Whereas bhade ke tattu (hirelings) from Europe were taken there. Isn’t it an insult to all MPs? I want to ask ruling alliance MPs... don’t they think it was their insult?” Mr Chowdhury said, amid protests from the treasury benches.

The DMK leader also said the same was the case with PDP leader and former J&K chief minister Mehbooba Mufti and noted that her daughter had said that the PDP leader had been manhandled.

Making a passionate appeal that Dr Abdullah be allowed to attend the House, National Conference MP Hasnain Masoodi said the former chief minister was under preventive custody, not under judicial custody, and that it can be revoked by the Speaker’s order.

“Farooq Sahab represents Srinagar and it is the right of the 20 lakh people of Srinagar that their voice be heard in this House... I have proof that he is not in judicial custody, he is in preventive custody. Your one order can revoke it,” Mr Masoodi said, addressing the Chair.