India   All India  19 Dec 2019  'Incitement to anti-Indian violence by Pak not conducive to peace': Rajnath Singh
India, All India

'Incitement to anti-Indian violence by Pak not conducive to peace': Rajnath Singh

Cross-border terrorism emanating from Pakistan appeared during the 2+2 ministerial talks. 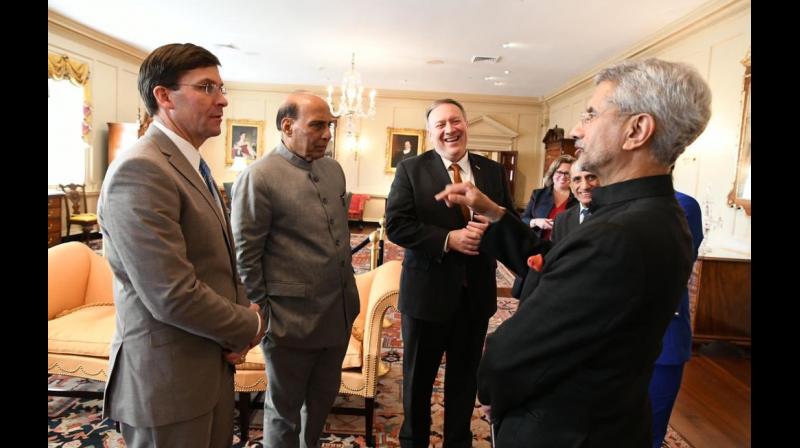 'We conveyed that the extreme rhetoric and belligerent statements and incitement to anti-Indian violence by Pakistani leaders is not conducive to peace,' Singh told reporters at the conclusion of the talks. (Photo: Twitter | @rajnathsingh)

Cross-border terrorism emanating from Pakistan appeared during the 2+2 ministerial talks that concluded here between Singh, External Affairs Minister S Jaishankar and their US counterparts Defense Secretary Mark Esper and the Secretary of State, Mike Pompeo.

"We conveyed that the extreme rhetoric and belligerent statements and incitement to anti-Indian violence by Pakistani leaders is not conducive to peace," Singh told reporters at the conclusion of the talks.

During the meeting, we shared our assessments of the situation in Afghanistan, Pakistan, Nepal, Sri Lanka, and the Indian Ocean region in general, he said.

Pompeo, during a joint news conference in the presence of the other three leaders, spoke about cross-border terrorism from Pakistan.

"We understand the concerns that India has, rightful concerns that they have about terrorism emanating from Pakistan, and we assured them that we would take that into account," Pompeo said in response to a question on the recent US peace talks in Afghanistan.

The Americans briefed the Indians on Afghanistan.

"We shared with our Indian counterparts, as we have consistently throughout our efforts to develop intra-Afghan negotiations and peace and reconciliation in Afghanistan, the path that we're headed down. We're very transparent," he said.

"We have been unambiguous in our partnership with the Indian government about here, terror wherever--from wherever it emanates, whether it's from inside of Pakistan or from anyplace else," Pompeo said.

Noting that counter-terrorism effort was discussed at the meeting, Jaishankar said these have been boosted by a growing consensus on the nature of terror threats in the region and the dangers of cross-border terrorism and sanctuaries.

He appreciated the sentiments expressed by Secretary Pompeo on the 11th anniversary of the 26/11 Mumbai attack.

"We discussed ways to address these challenges, including by working closely together at the FATF. We also took note of exchanges between our judicial academies for appreciation of challenges and evolving practices and adjudicating counter-terrorism cases and agreed to further facilitate such exchanges in areas of criminal jurisprudence," Jaishankar said.

"In terms of terrorism in our region a lot of it is obvious. It doesn't need reiteration," he said in response to a question.

"We did exchange notes … of the challenges in our region and what have been the newer developments on that front. This is an area where the two countries actually have a very strong history of cooperating. I can only say this in terms of public record, that I am very satisfied with the discussions we've had today," Jaishankar said.